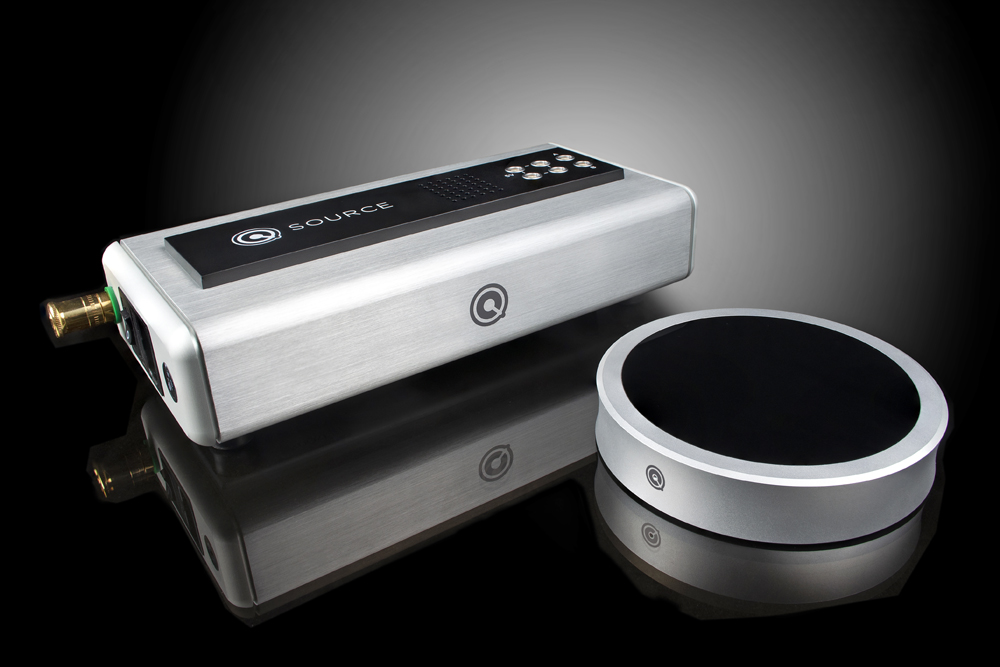 High-end audio enjoys some of the best engineering and innovative technologies which are the equal to any industry at large. As highly developed as audio products are, there’s also a healthy space for ancillaries aimed at wringing the last drop of performance from electronics and loudspeakers. Some are mere ‘tweaks’ which contribute varying degrees of effectiveness. Some may even have dubious scientific merit. There are supplementary products with known benefits, such as those aimed at reducing vibrational distortions by coupling, grounding or isolating. These can be inert platforms, cones, complex ceramic and metal bearing devices and a cornucopia of variations on the theme. Others, like power conditioners and regenerators, are designed to eliminate AC distortions via an interface between electronics and the grid. Nordost, maker of some of the very best cable solutions in the industry, has applied its engineering know-how to its QRT products which the company refers to as ‘Audio Enhancers’. The steadily-growing range is now joined by the unique QPoint Resonance Synchroniser and dedicated QSource Linear Power Supply.

Running through the product does not entail a tome of features and technology descriptions. The QPoint, while beautifully machined from aluminium, looks like a simple puck-like disc with a smoked glass top, a small ‘Mode’ blue/green LED centred on the ‘Q’ logo, a quality toggle switch for Mode selection and a 4-pin LEMO AC power socket. Use is simplicity itself. Nordost instructs to just place QPoint underneath your equipment (with proximity to capacitors and power supply components), if space permits, with the black top plate facing upwards. The converse is suggested if placed on top of a piece of kit. A small circular leather pad is provided as a surface protector against scratches to both the QPoint’s glass top and/or your equipment. The QPoint ships with a standard switch mode power supply 5V/0.1A wall-plug at the end of a long-ish cable terminated via a push/pull LEMO plug. Nordost suggests the effects of QPoint are cumulative recommending the use of multiple QPoints where possible. 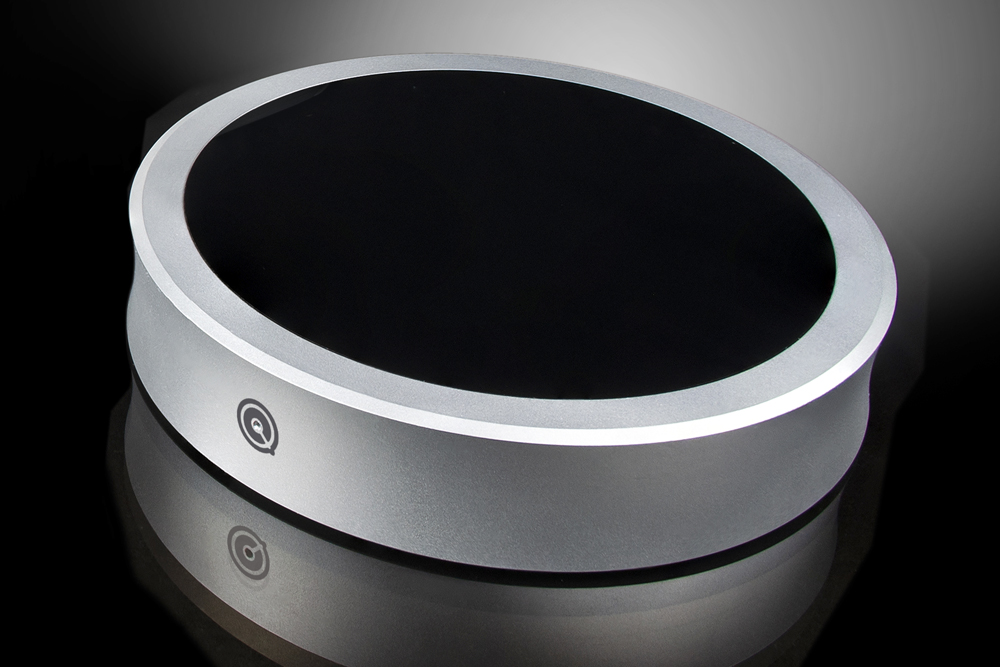 On paper, the idea behind the QPoint would seem simple enough. At his presentations, Bengtsson always refers to a now-famous Harvard University You Tube clip depicting a number of metronomes which are swinging independently and unsynchronised (search and ye shall find). Eventually, a ‘dominant’ metronome attracts the others into conforming and synching in unison to its motion (or frequency) so that by the clip’s end, all metronomes are swinging in perfect synchronised tempo. As Bengtsson told me, “Long story short, in synch you consume less energy, and therefore it means better precision”.

Further, Bengtsson explains how regulators, transformers capacitators, rectifiers, resistors and the like are all in constant mechanical oscillation in relative out-of-kilter motion thereby creating noise. “As soon as you put DC through them they start to resonate. So our idea here is to produce a resonance that is very precise and subtle but stronger than all of the individual parts to dictate a synchronised pattern where the other components can synchronise to.”

We’re told QPoint’s internals are populated with a variety of coils and a control clock. An electro-magnetic field is produced which Nordost has calculated to act as the ‘dominant frequency’, in theory pulling your component’s electronic parts into synchronisation. As all the components come into collective alignment the claimed result is less energy consumption, with the parts working with improved efficiency and exactness. We’re also told that the synchronisation process takes approximately 10 seconds to complete. QPoint offers two switchable modes, ‘Mode I’ and ‘Mode II’ (different oscillation frequencies expressed via the blue/green Mode light) in order to provide an alternative frequency for compatibility to a wider selection of component parts. 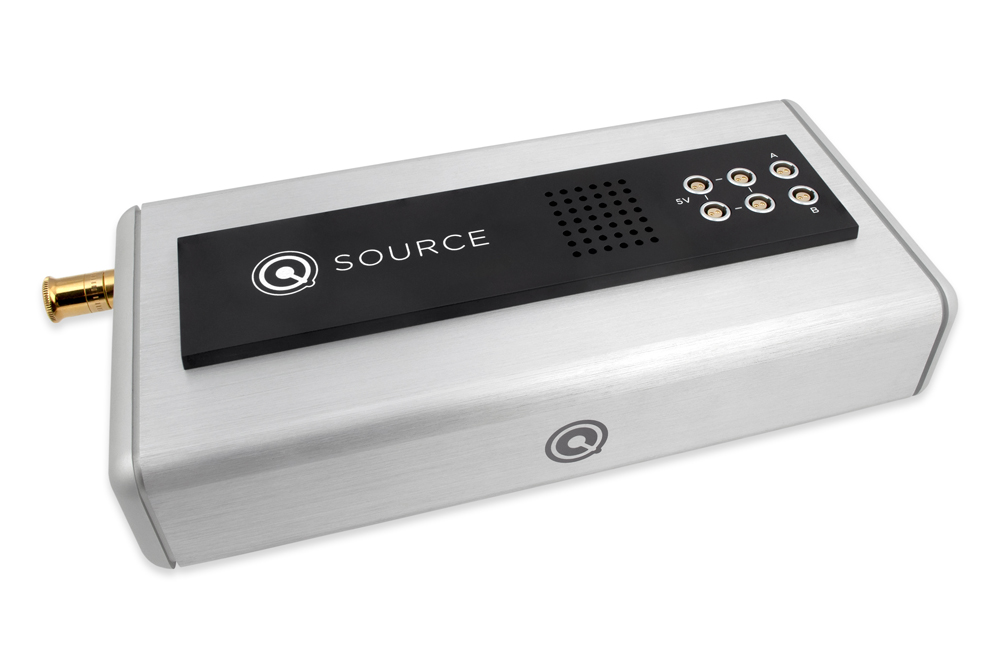 The QSource substitutes the QPoint’s wall wart switch mode power supply with a sturdy linear power source. It features a high quality low noise transformer, fan-less cooling (the chassis is designed to provide heat sinking) and converts AC power to a stable DC supply. The QSource can accommodate up to four QPoints via its 5V supply. Its design also caters to 9V, 12V, 19V and up to 24V loads in order to accommodate other products in the signal path via the same LEMO connectors. A set of Micro Mono-Filament, shielded twisted pairs cables featuring a duo of OFC solid core silver plated 22 AWG conductors are provided for QPoint/QSource connectivity. A premium cable set can be ordered featuring similar topology but with larger 18 AWG conductors.

I started off by placing a QPoint atop the power supply of the Supratek Cortese preamplifier (Nordost suggests first trying QPoint on the preamplifier). Listening to a variety of music with the first QPoint in place resulted in some very subtle differences. I consider my system quite revealing (Wilson Audio Alexia Series 2 won’t hide a thing) yet the changes between avec QPoint and sans QPoint seemed fleeting. Sometimes I was sure I heard a small change in soundstage depth and width while other times I was in two minds as to whether I perceived much of anything at all. The Supratek sits on SGR Audio’s super-effective Statement Model V isolation platform/rack, itself sitting on a concrete block so, aside from the oscillations inherent in the electronic components, any other vibrational distortion is already pretty much eliminated.

So, perhaps this is, as Nordost suggests, an accumulative phenomenon. A second QPoint was placed underneath my Gryphon Antileon EVO power amplifier. I aligned the QPoint below the Antileon EVO’s massive coke-can capacitors and also tried it in a position halfway between those and the transformer. In both cases, QPoint was plugged directly into AC (dedicated audio circuit) via its wall wart. 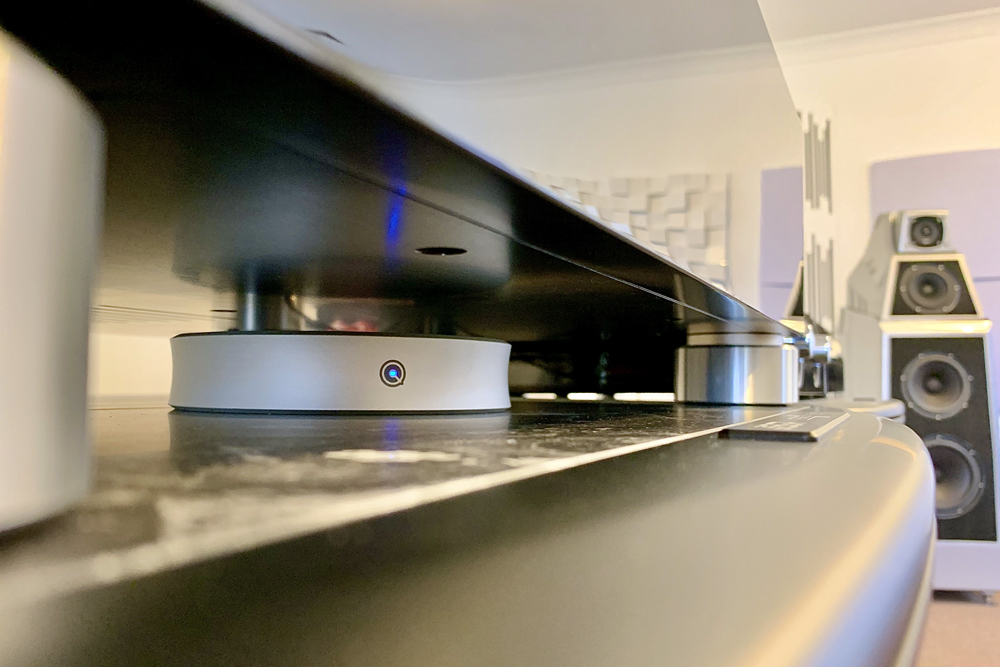 Now, I was cooking with gas. The additional QPoint was now offering a more evident change in the soundstage and lowering the overall system noise. The reference system is very quiet – dedicated circuits made a big difference there – but now there was a subtle step-up in that ‘dark background’ thing that audiophiles often refer to.

Subjectively, listening to the title track of Hadouk Trio’s Baldamore, a stunning live recording, I could now perceive a somewhat larger soundfield in all dimensions, including the trickier-to-reproduce height perspective. Ditto on Nirvana’s Unplugged where the layering of the players was a tad more precise and Kurt Cobain’s placement a touch more clearly defined up front and centre.

Aside from those observations, all other aspects of reproduction seemed unchanged. So, the next step in my QRT product journey of discovery was to engage the QSource’s far superior linear power supply and its distribution capabilities within the context of the QPoints at hand.

Introducing the QSource’s DC power purity bumped things up a bit more again along the lines of the hike in performance offered by the addition of the second QPoint. Backgrounds went somewhat quieter, there was yet another expansion of the soundfield, particularly in the sense of an extended depth to the soundstage.

Again, one of my favourite live recordings served best to illustrate what the QSource and QPoints were getting up to. Ryan Adams’ Ten Songs From Live At Carnegie Hall is an upfront recording in terms of Adams’ vocals and the Q-Combo maintained his corporeal position vividly while also exhibiting, seemingly, the full extent of the deep stage. The blacker background now at hand allowed a finer perception of the hall’s ambience and of the ‘air’ around Adams’ piano and guitar (less so his voice for its close microphone proximity). 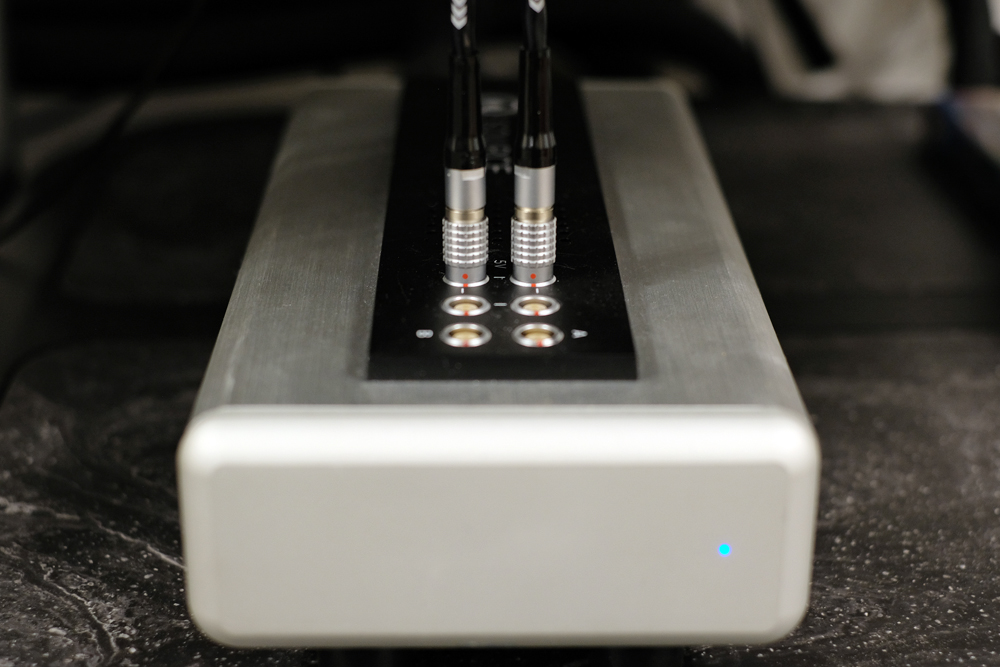 I enjoyed the subtleties of Emily Jane White’s They Moved in Shadow All Together where tracks such as “Nightmares on Repeat” and “Hands” separated White’s vocals from both the female backing singers behind her and the tracks’ sparse instrumentations.

I thought I heard Antonio Forcione’s guitar, from his collaboration with Sabina Sciubba on Meet Me In London, having a touch more body and presence. Again, I think QPoint/QSource’s strengths in ‘blackening’ background noise may flesh-out the music, especially through the top-end.

The compounding properties of multiple QPoints and the dedicated QSource may, or may not, be system dependent. In the context of my system, there were some subtle yet worthwhile expansions to the soundfield recreation and the ‘blackness’ of the background. As Bengtsson explained, his demonstrations around the world at audio shows never fail to make performance improvements in a wide variety of systems. That’s both in his opinion and also based on the feedback from show attendees and customers. 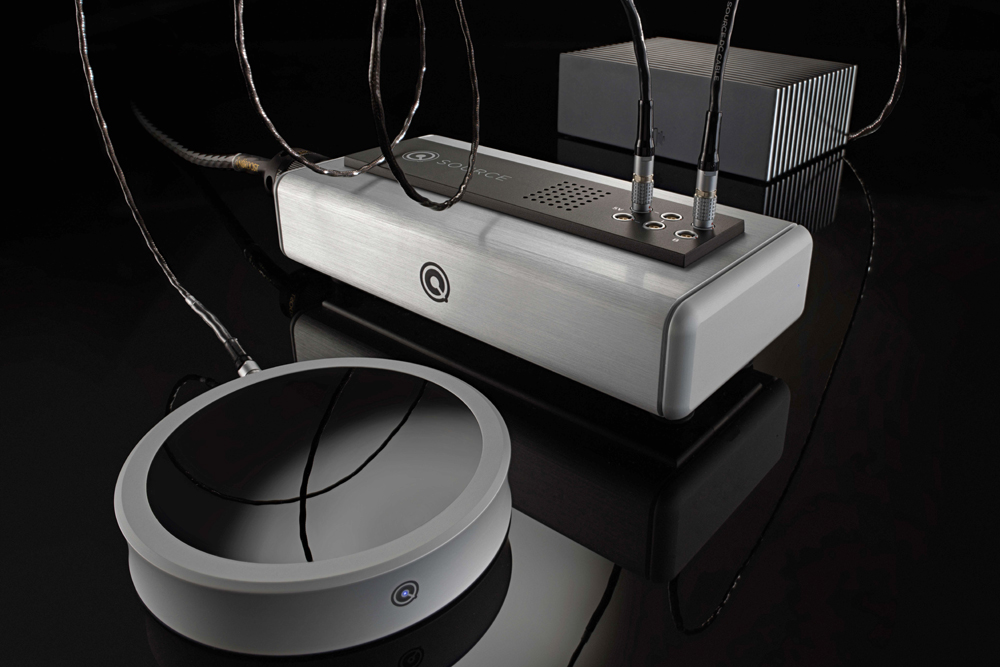 Perhaps these sonic differences won’t floor you, or have you rolling around in ecstatic convulsions… or maybe they will. As with any audio component, your own evaluative governance will determine these products’ value proposition. In this writer’s opinion, the gains are there to be enjoyed, with their significance open to your own interpretations… that’s the nature of subjectiveness.

I say sit back, relax, have a listen and be open to the possibilities because, after all, who doesn’t crave a life of harmonious synchronicity with nature…