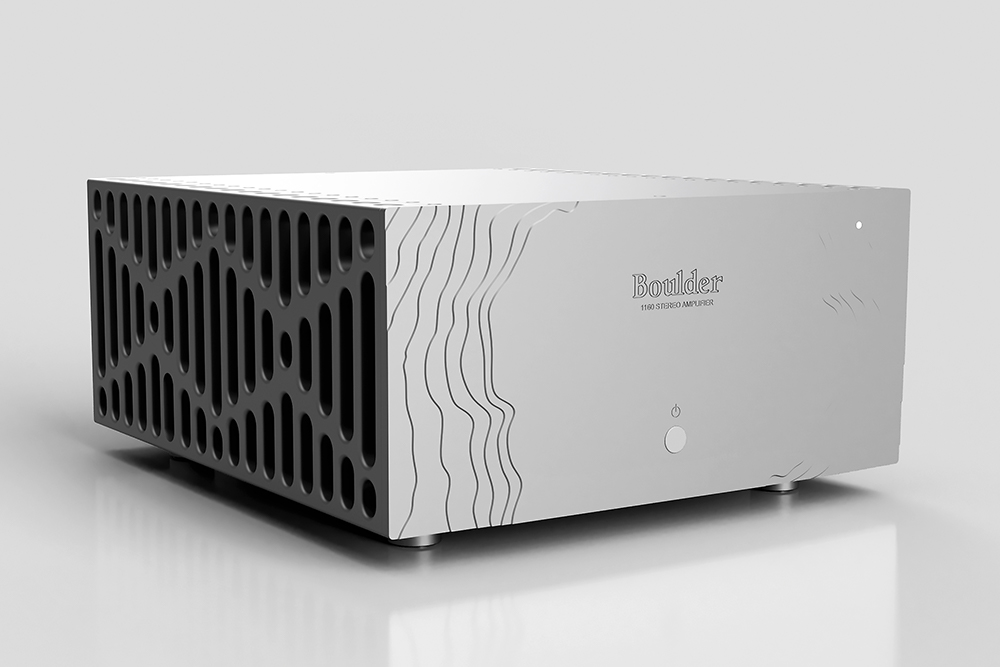 Boulder Amplifiers has announced the 1160 stereo high-power amplifier, which is the first model to be introduced in the new 1000 Series.

While featuring aspects of the company’s previous offerings – mainly the unique heatsink configuration, which has been refined with radii and curves, and massive three-phase-style AC inlet – the new 1160, however, features a host of new technologies and circuit refinements.

The 1160 is a genuine powerhouse, putting out a solid full 300 watts into loads between 8 and 2 ohms, while peak power is quoted as doubling down from 8 ohms at 300 watts down to 1200 watts at 2 ohms. The renowned technical excellence of Boulder Amplifiers designs is continued here with enviable total harmonic distortion (THD) figures specified as 0.0009% at 8 ohms, full power, 20Hz to 2kHz (0.0048% to 20kHz), with low distortion being maintained down to 2 ohms, full power, 0.002% (20Hz to 2kHz) and 0.0130% to 20kHz. The voltage gain of 26dB and input impedance of 100k ohms makes for good compatibility with a wide range of active and passive preamplifiers.

Another first in the 1000 series is Boulder Amplifier’s ARM (Advanced RISC Machine), a 64-bit multi-core processor that has been applied in order to monitor operational amplifier functions such as the unit’s protection circuits, its AC line status, power, thermal detection, and provision of error notification and HTML- or IP-based control. BoulderNet provides internet IP-based amplifier control for configuring the unit’s layout and communication architecture via external control systems such as Savant or Crestron and application-based system controls. Ethernet network connectivity can provide an HTML setup and control page by simply connecting to the amplifier’s IP address via a standard browser.

The customary Boulder Amplifiers fascia, always a massive aluminium number, is now adorned with a seemingly random wave-like pattern, which, in our guess, mimics the outlines of… well, boulders. However, we’re told the pattern reflects the topographical map of Flagstaff Mountain, a local landmark located near Boulder, Colorado, USA, the company’s obvious headquarters.