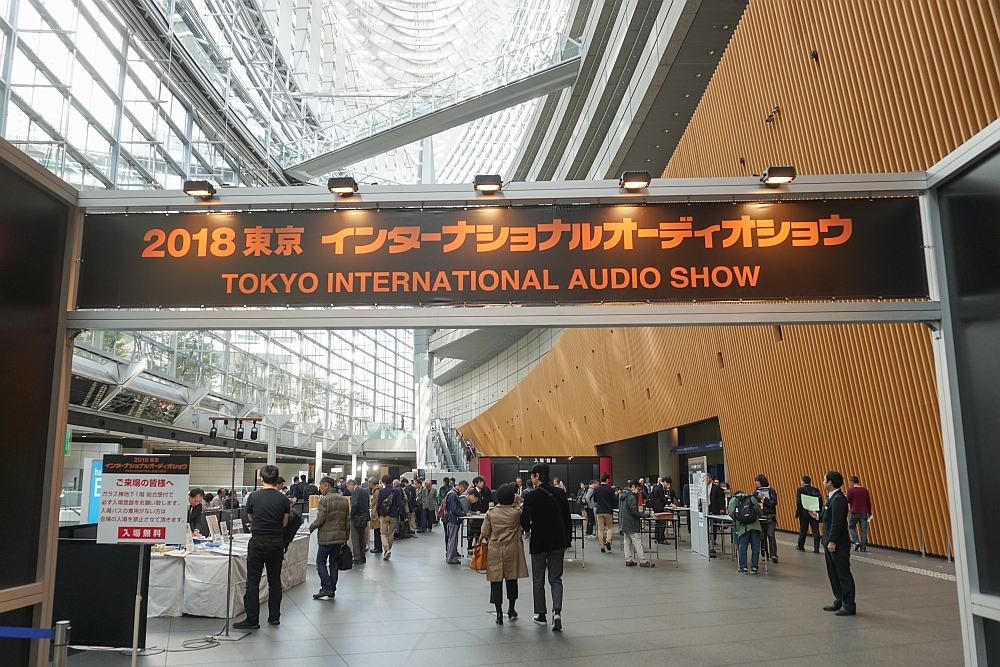 While not the biggest show in the home audio world, it is distinguished by remarkably good sound in almost every room. In specific instances, the presentation is exceptional and not merely by show standards. This consistency of high quality presentation is in part attributable to the fact the rooms at the Tokyo Show have better acoustical isolation and treatment than your typical de-bedded hotel room in the West. They are all of decent size and shape and, in the case of some, are veritable auditoriums. Self-evidently, great care and expertise is applied to each and every set up, no doubt aided by the fact the same exhibitors tend to use the same room and mostly the same brands of equipment every year.

Having said this, the ability to achieve consistently decent sound when two to three speakers are being regularly rotated with as many combinations of different amplification is truly laudable – and highly enjoyable.

The show goers also appear to be highly discerning and expectations are high. While yours truly was in the Boulder room, one elderly man, whom it transpired spoke perfect English, castigated the exhibitor for playing the same Eagles record over again opining that “any system here could play that”. He grew even more frustrated when the LP was then changed to Jazz at the Pawnshop and breathed a loud sigh of relief when he could “properly evaluate piano and string tone” on Mozart’s Piano Concerto No. 25. He took out a notebook and started to make notes. Are you a reviewer, I enquired. “No, I just want to hear good sound”.

Due to communication difficulties, some specific detail and most pricing were inevitably lost in translation. However, all exhibitors were most helpful. I returned to the TAD room a number of times and they actually went and brought me an English translation of the brochure after trying to explain this one. 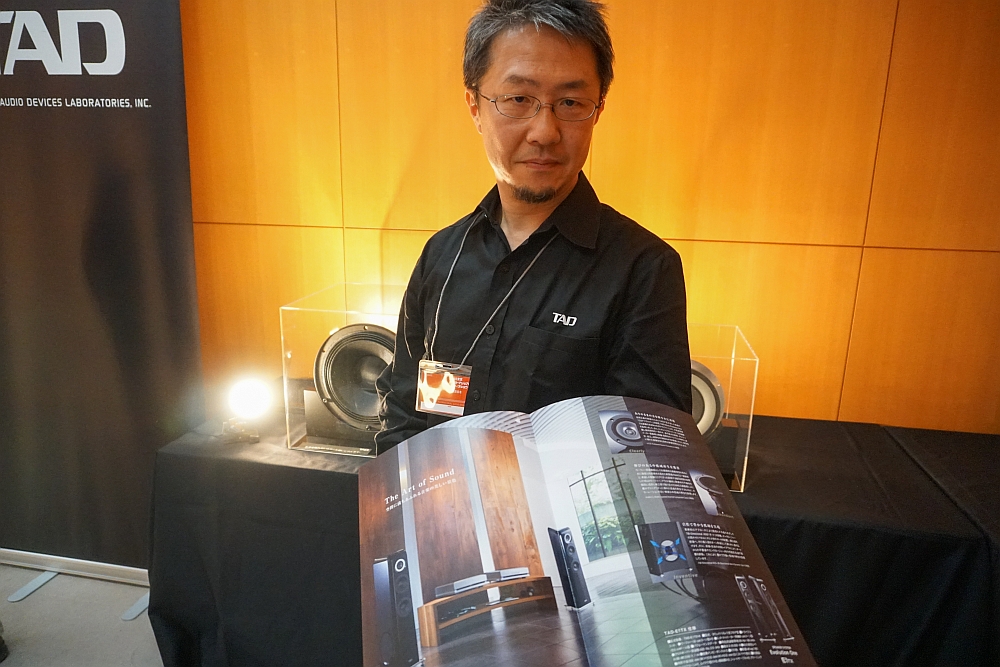 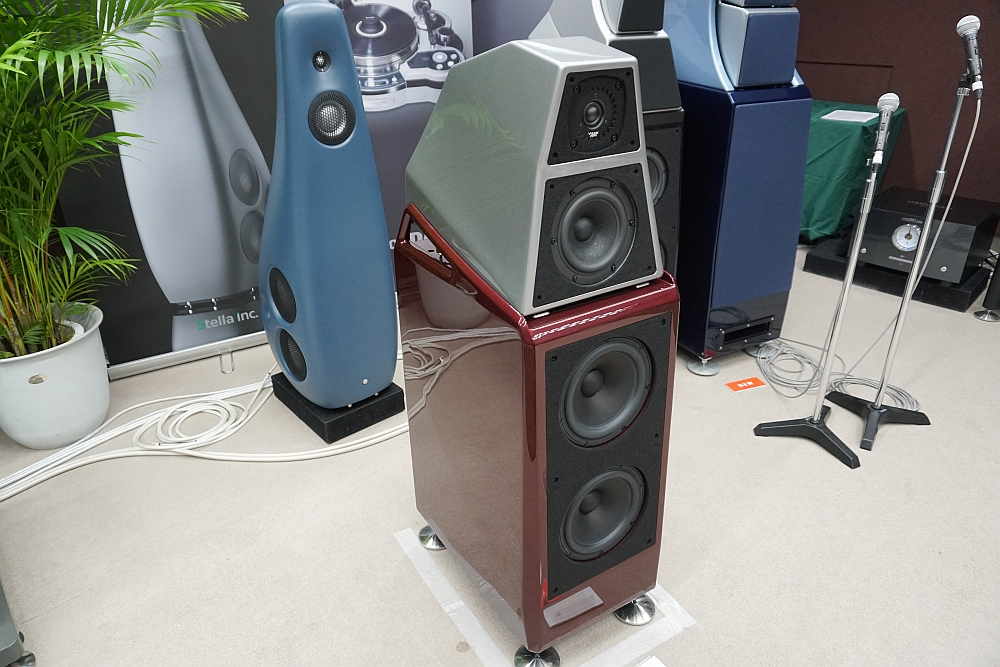 The Stella and Zephyrn companies, in one of the very biggest rooms and displays of equipment, had some of the best sound at the Show. At one end of the room, the new Wilson Audio Sasha DAW driven by Constellation Audio amplification showed great promise with notable dynamic agility and insight when sourced from a TechDAs Air Force 1 Premium/SAT analogue front end as did the surprisingly transparent and big sounding Vivid Audio Kaya 90. 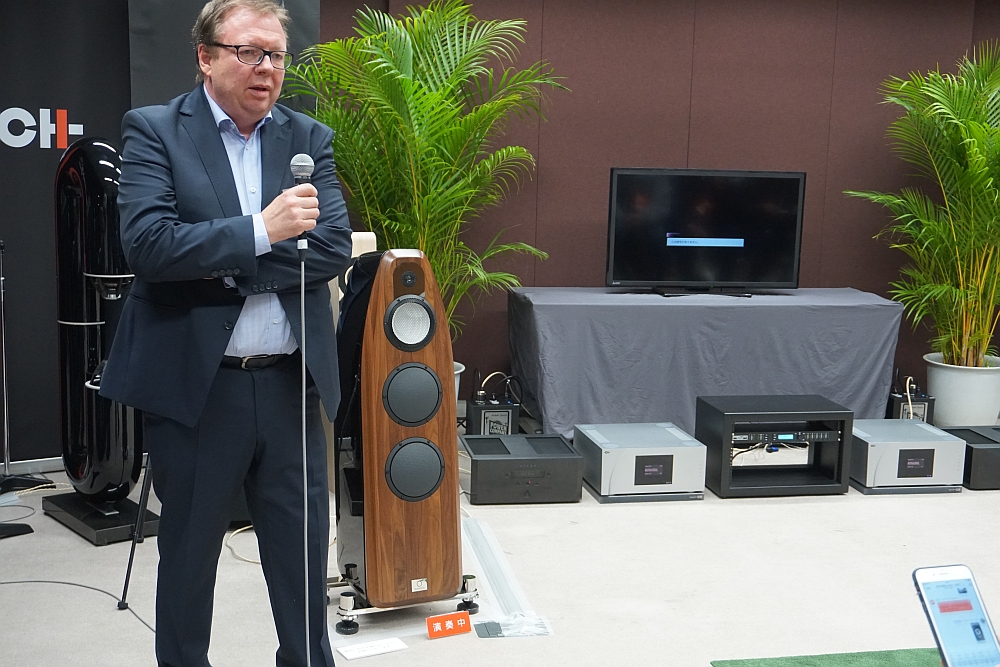 At the other end of the room, after the jewel-like HSE Swiss Masterline ML7 phono preamp was wheeled down in a trolley and hooked up to an SME Model 30/12 turntable, the Marten Coltrane Tenor 2 impressed with its extreme coherence and resolution of fine detail. It is customary for what started out as an “Import Audio Show” to fly over international designers and here Leif Marten Olofsson presents the finer points of the loudspeaker’s design. 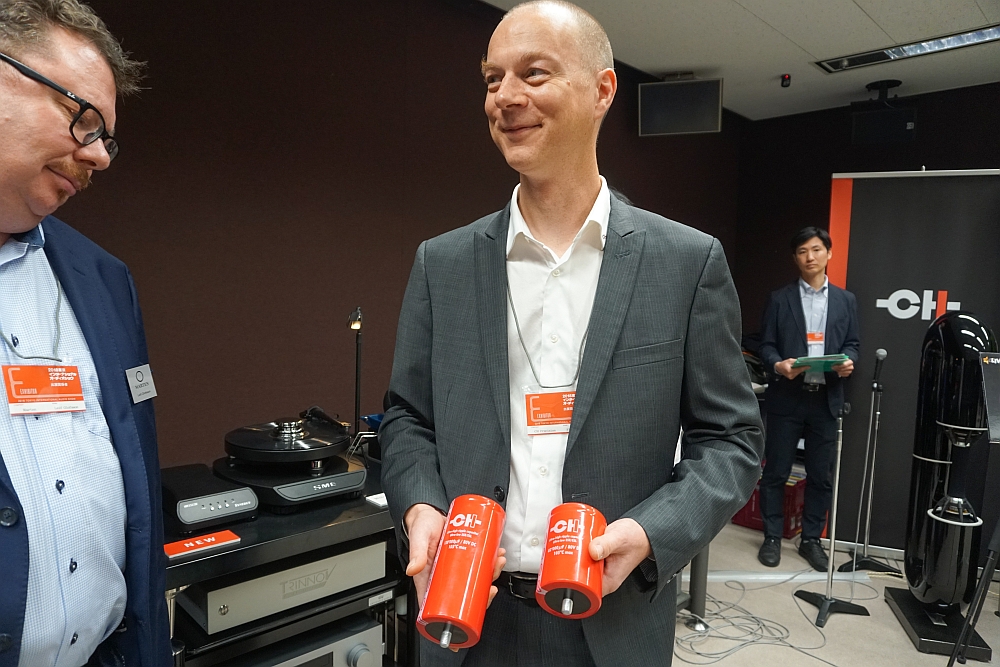 Driving the Marten speaker with precision and grip was the brand new CH Precision A1.5 power amplifier here run in monaural configuration. The A1.5 features a newly designed power supply necessitating a larger casing for the new amp. CH Precision’s Florian Cossy is justifiably proud of his latest proprietary capacitors, the larger of which is the new “Red Cap” upgrade to the M1 mono amps while the smaller is found in the very flexible A1.5. 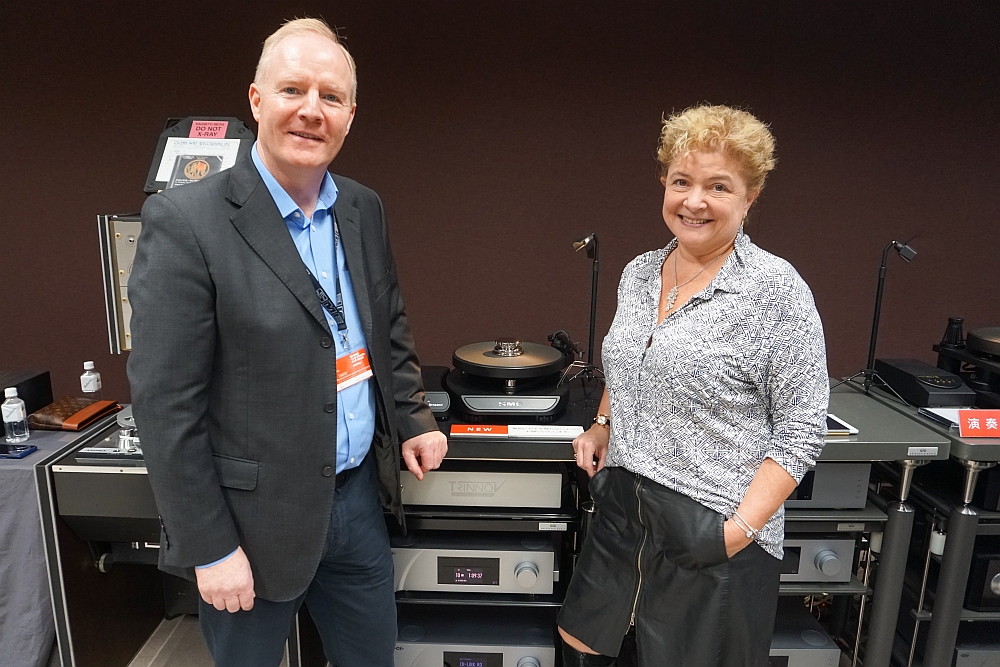 The following day saw presentations by Gabi Rijnveld, the high priestess of Crystal Cable, and Stuart McNeilis, the CEO of SME. The two had come together to introduce the new Synergy collaboration, a rather tempting integrated “plug and play” turntable solution combining SME’s history and manufacturing prowess with Crystal Cable’s audio lead and internal wiring and a Nagra built-in phono stage. McNeilis also showed me SME’s newly re-issued 3009 Series II tonearm (with original boxes he found in the basement of the factory!) and a beautifully restored Garrard 301 (SME has recently acquired the rights to the legendary brand as well as its only authorised service agent, Loricraft Audio). Wowza. He must have seen me coming! 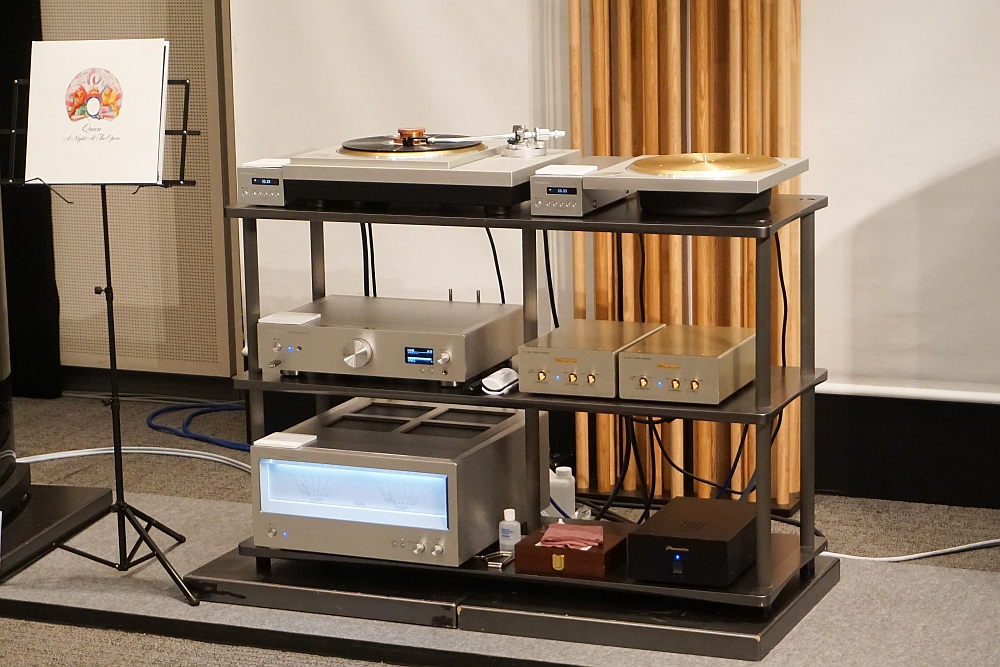 The vast majority of the rooms used at least a turntable as an alternative. Technics (Panasonic) didn’t bother with anything else. They were showcasing both the SP-10R and the powerful sounding SL-1000R turntables in a complete Technics set-up. Technics also makes criminally-underrated speakers as Naoto Kurosawa of Technical Brain will attest. Tokyo has gone Queen-crazy with the recent release of the Freddie Mercury movie and A Night at the Opera was a commonly heard reference album throughout the Show, for better and for worse. 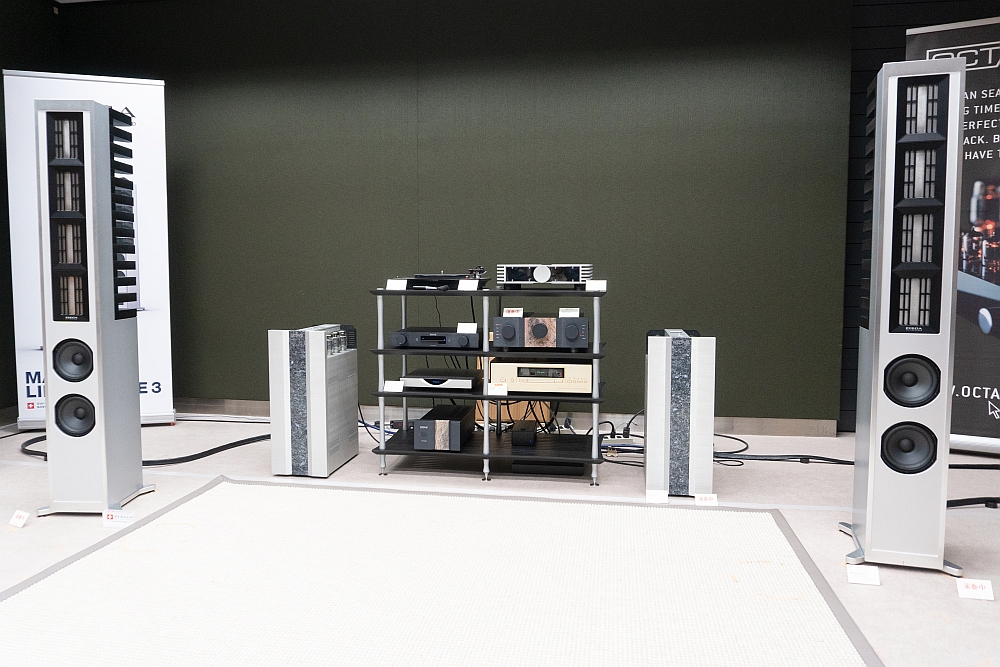 The Piega Master Line Source 3 speakers in combination with Octave Jubilee Line electronics made for some of the most natural, open and musically compelling sound at the Show. An innovative dipole emitter with four ribbon tweeters, it exhibited nary a hint of compression even when the Wayne’s World part of “Bohemian Rhapsody” kicked in at teeth gritting volume levels. 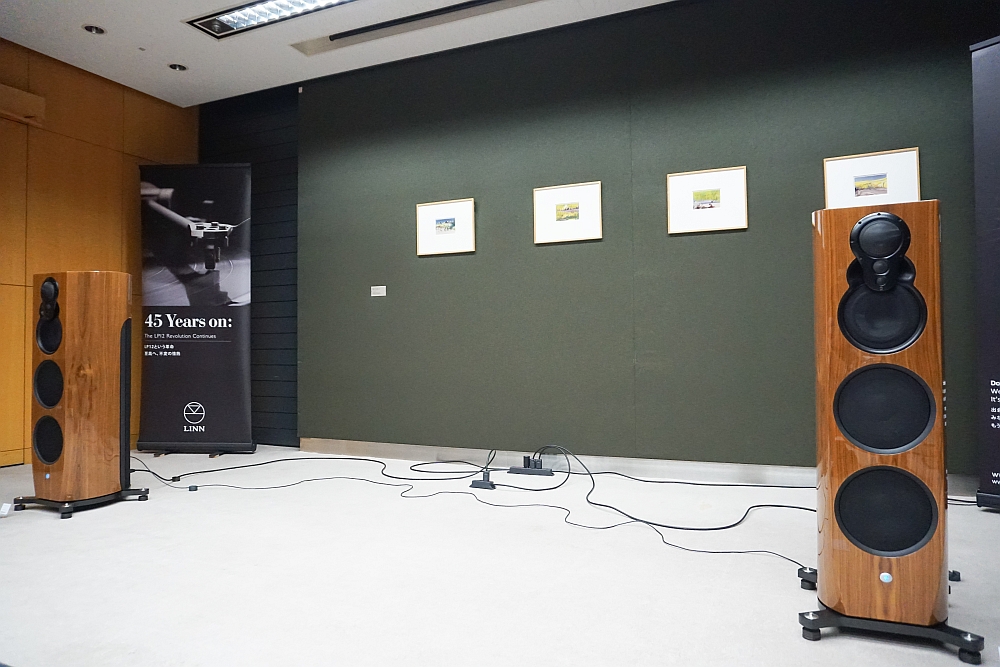 Another surprisingly good demonstration was heard in the Linn rooms. In one room, Linn was showcasing the brand new Selekt DSM modular solution, while in the other, the Klimax DSM/2 streamer with active 350 speakers sounded especially capable – effortless, spacious, and uncoloured. Imaging was pinpoint and holographic all the while carrying the tune with old flat earth know-how and musical involvement. 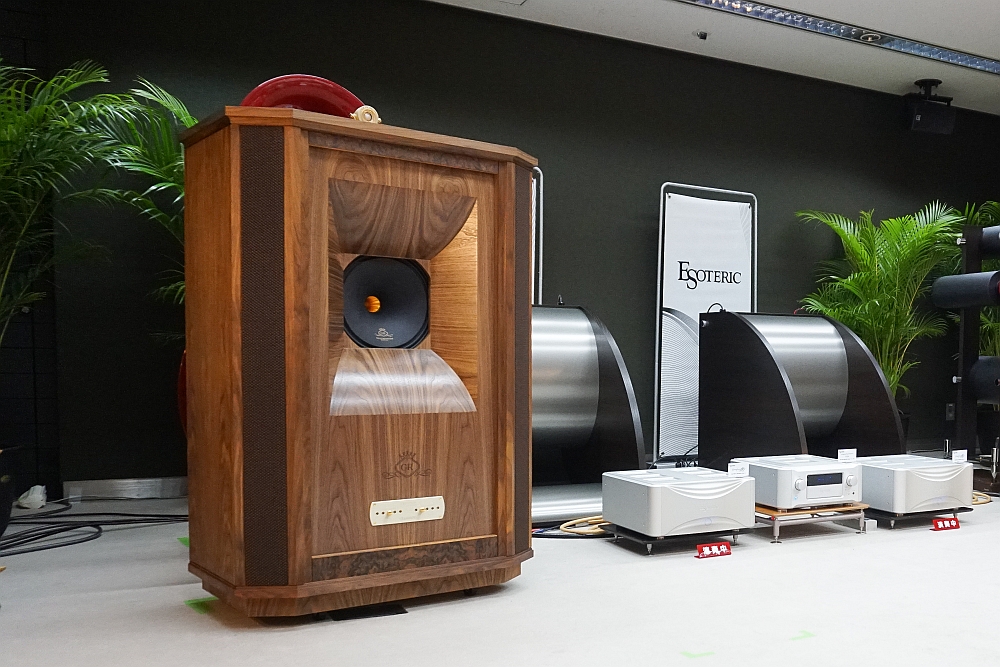 Speaking of the Scots, in the very large Esoteric room, I finally got to experience the mighty Tannoy Westminsters which were being rotated with the Avantgarde Uno XD Fino Edition and the Avantgarde Trio Luxury Edition 26 with two active Luxury Edition Basshorns. For me, the Westminsters were the pick of the bunch on the day, if a bit darker and more closed in sounding with the full Esoteric Grandioso line-up. I can think of at least one Japan-worshipping Techno Shaman who may not quite get their mating to such high powered solid state amplification. 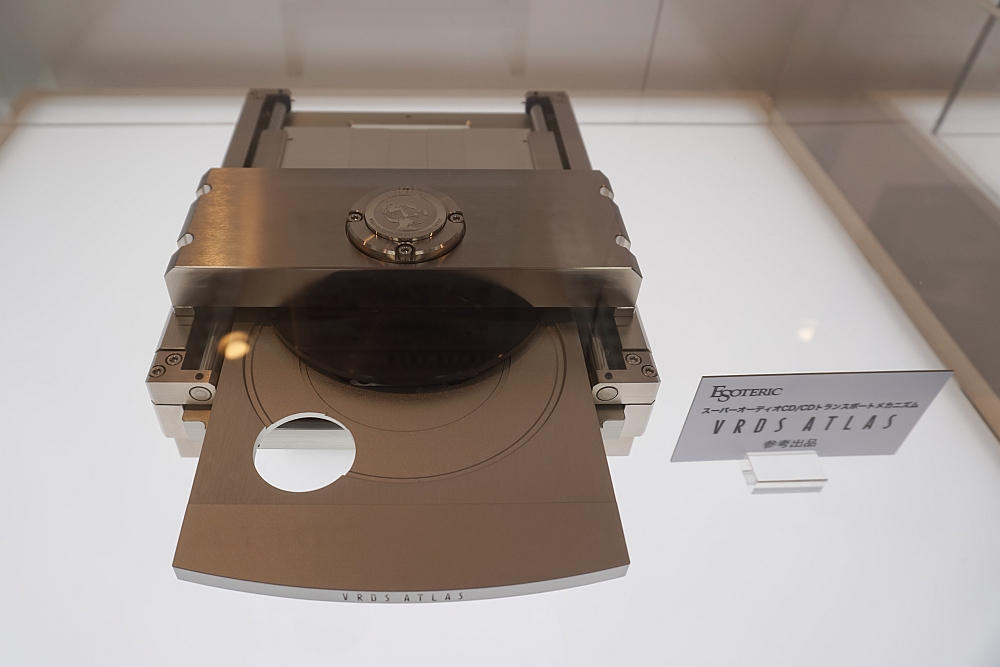 Esoteric, however, amidst its vast illuminated array of gleaming equipment were celebrating the release of a new CD transport mechanism, the VRDS Atlas, showing there’s still life – and room for improvement – in the old beast yet. 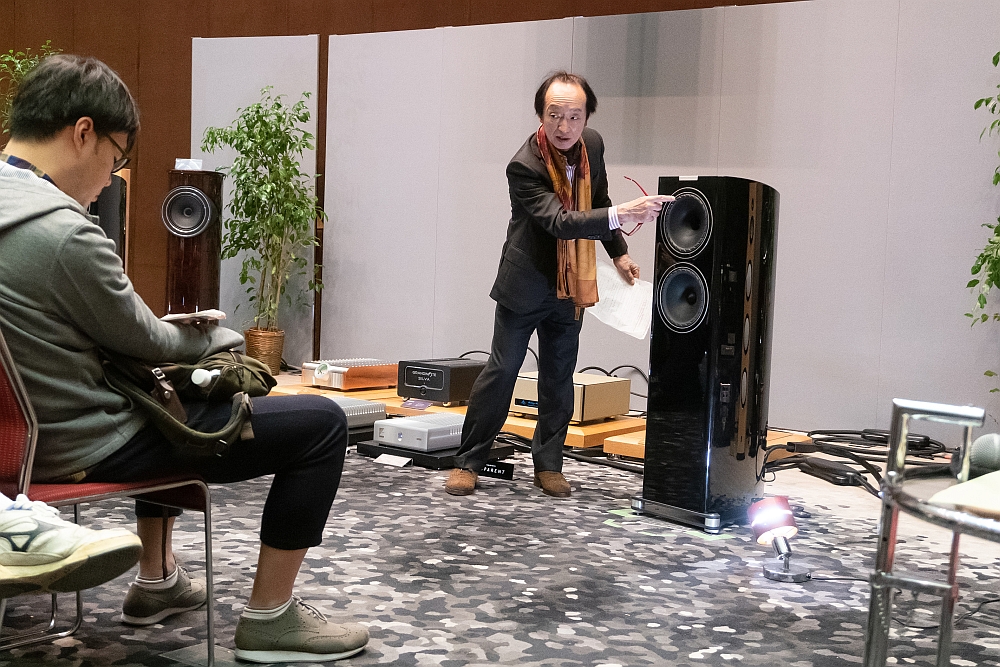 More Scots! Formed by ex-Tannoy employees, the new Fyne speaker line was getting a major showcase in the huge AXXIS Corporation room as were Italian relative newcomers, Grandinote whose Proemio pre and Silva power were pressed into active duty at the Show. AXXIS is one of the largest of the Japanese distributors and it was refreshing to see and hear these developing brands highlighted alongside established lines such as Lumenwhite, FM Acoustics, Dan D’Agostino, Ayre and MSB Technology. The Fyne F502/Grandinote combination with Bergmann Audio analog sounded vital, alive and unfailingly musical with excellent rhythmic drive and point source focus. Both of these noteworthy new brands really do warrant further investigation back home. 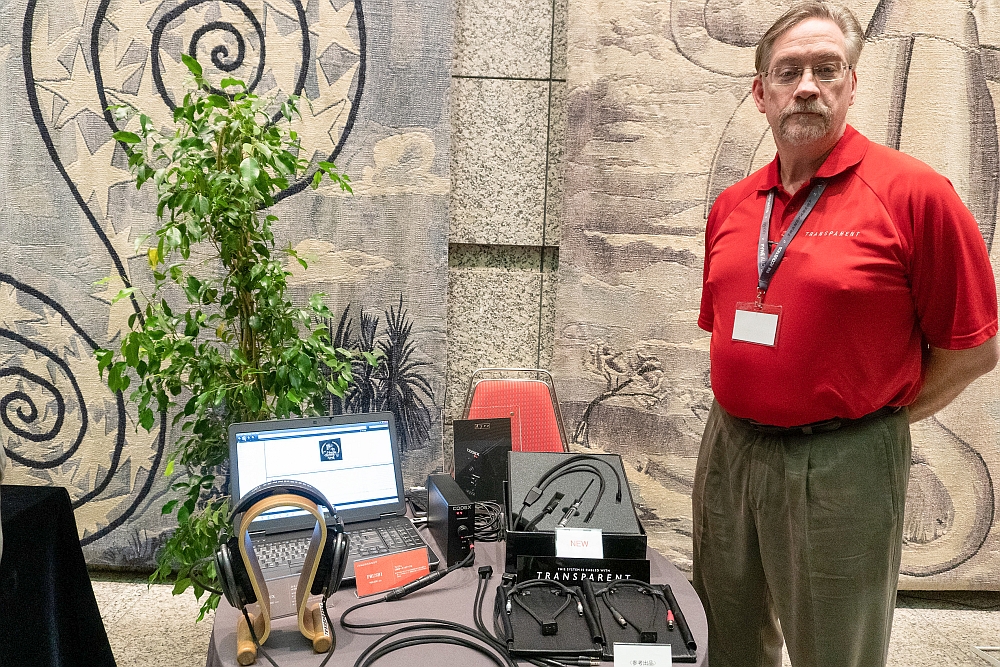 Transparent have come up with a nifty new cable solution for Head-Fi enthusiasts. Tired of having to shell out for yet another expensive aftermarket cable upgrade for each new headphone acquisition? Check out this ingenious new set of multiple connectors from Transparent. 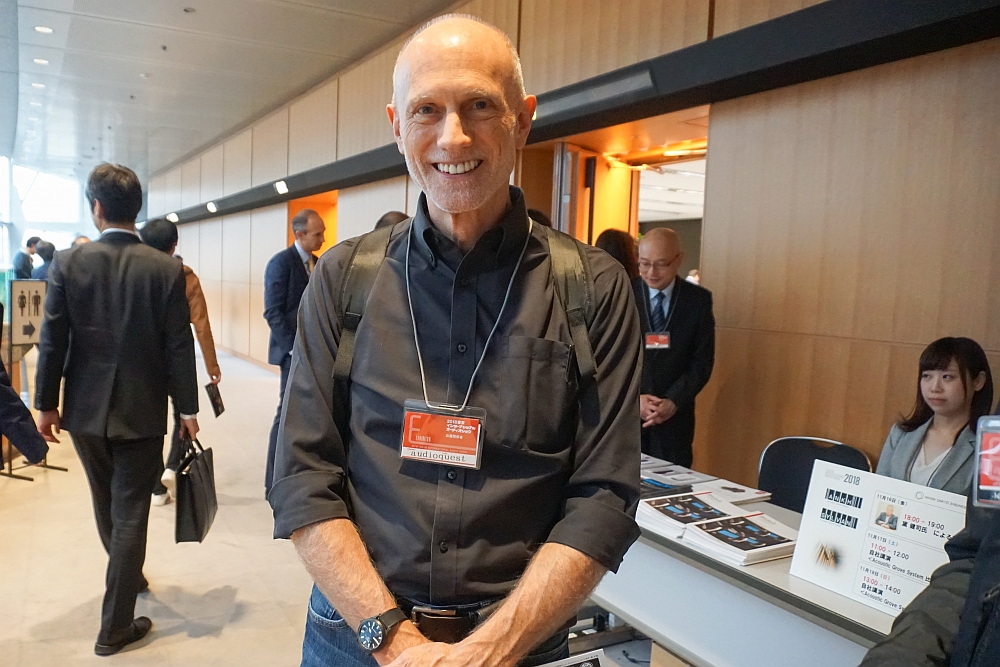 It was nice to meet William E. Low of Audioquest Cables. Expect to see some Audioquest cables in your local JB Hi-Fi very soon.