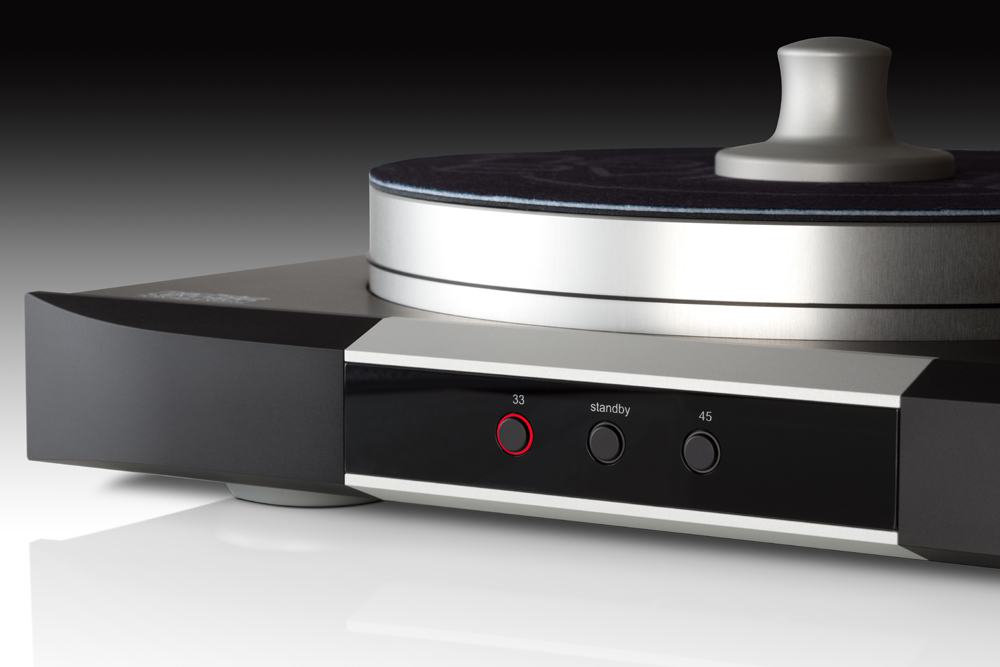 The № 5105 is Mark Levinson Brands second ever designed turntable after the critically well received № 515 turntable. The № 5105 turntable is designed as an almost plug and play system, especially so under the MC suffix. So, before I get to plug and play with this gorgeous design, let me paint a backdrop to this current canvas…

The designer Mark Levinson first introduced his products to the world in 1972 to worldwide acclaim. Who can forget the truly inspiring ML-2 Class-A amplifiers. In fact, many credit Mark Levinson (alongside contemporary Dan D’Agostino) with being the launching pad for the high-end audio industry. Levinson hasn’t owned the company name for quite some time, being acquired first by Madrigal Audio Labs in the 1980s and in turn, that company been acquired in the 1990s by the Harman International Industries (Harman is now part of the Samsung Group).

Introduced in 2019 the № 5105 is designed to complement the other six products in the current Mark Levinson 5000 series which includes a preamplifier, a power amplifier, Digital Audio Streaming SACD/CD player and two integrated amplifiers.

This review sample was provided as the № 5105 MC, with the ‘MC’ designating that the turntable comes pre-fitted and aligned from the factory with Ortofon's Quintet Black low output moving coil with a shibata-shaped stylus. The № 5150 sans the ‘MC’ comes without a cartridge so you can fit your own selection.

The iconic Mark Levinson design is in strong display with the № 5150 turntable. Black colours dominate the design with the Mark Levinson name emblazoned on the turntable mat with the 'diode'-inspired logo. Visually, it all incorporates nicely with the black and silver machined and brushed aluminium surfaces.

Carried over from the Mark Levinson № 515 turntable is the hourglass-shaped aluminium and brass record clamp, echoing design cues from Mark Levinson rotary controls from the company’s preamplifiers. The clamp sits on top of the smartly and obviously-branded platter mat while underneath is a substantial solid aluminium platter weighing some 6 kilograms. Unwanted platter resonances are kept at bay by the use of damping material on the underside. At nearly 5cm tall this is a serious platter giving weight to Mark Levinson's description of a “Seriously Stable” turntable! 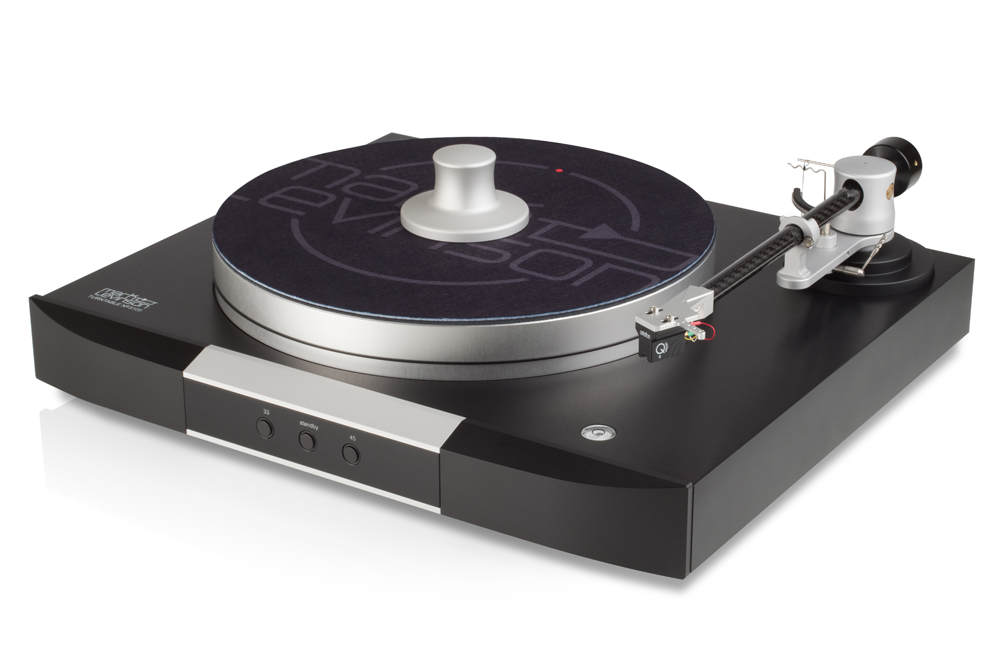 Attached to the platter is a precision ground and hardened steel shaft which runs inside two bearing sets, the top set features close tolerance ball bearings and the bottom a sintered brass bush which is self-lubricating. A composite material thrust pad at the base completes the assembly. Mark Levinson advises that the bearing is also self-lubricating and requires no maintenance for the life of the turntable.

The 25 kg-plus plinth is CNC machined from a solid billet of aluminium, finished with a brushed and black anodised look. The front control section consists of black and silvered aluminium with a bead-blasted finish. Two bulbous ‘cheeks’ on the left and right hark back to Mark Levinson amplifiers such as the revered 432. A clear glass panel in the middle holds the three control buttons for Stop/Standby, 33 and 45 rpm speeds. Red LED lighting glows on the circumference of the circular buttons when selected – a simple and strikingly elegant look in keeping with the tasteful design.

Behind the front panel hides the electronic control for the high quality speed-stable 12 volt DC motor. Four different power cables are included to cover worldwide voltages. These connect to an IEC female connector at the back so users can adopt their own aftermarket cable if they so wish. The motor turns a composite material pulley with a small precision ground square section belt running around the outside of the plinth for spinning duties.

The № 5150’s supplied tonearm is a gimbal bearing design consisting of black carbon fibre for the arm tube and bead-blasted aluminium for the bearing pillar and headshell. The slotted headshell allows for the user to choose a variety of cartridge alignment geometries and has an integral finger-lift for cueing. At the tonearm’s opposite end is black-finished brass counterweight and elegant thread and weight system for anti- skating duties. The arm has height and azimuth adjustment but pivot to spindle distance is fixed. The arm pillar pivot point is well marked for cartridge alignment protractors. The arm lift and rest are constructed from aluminium and match the well designed and engineered tonearm. 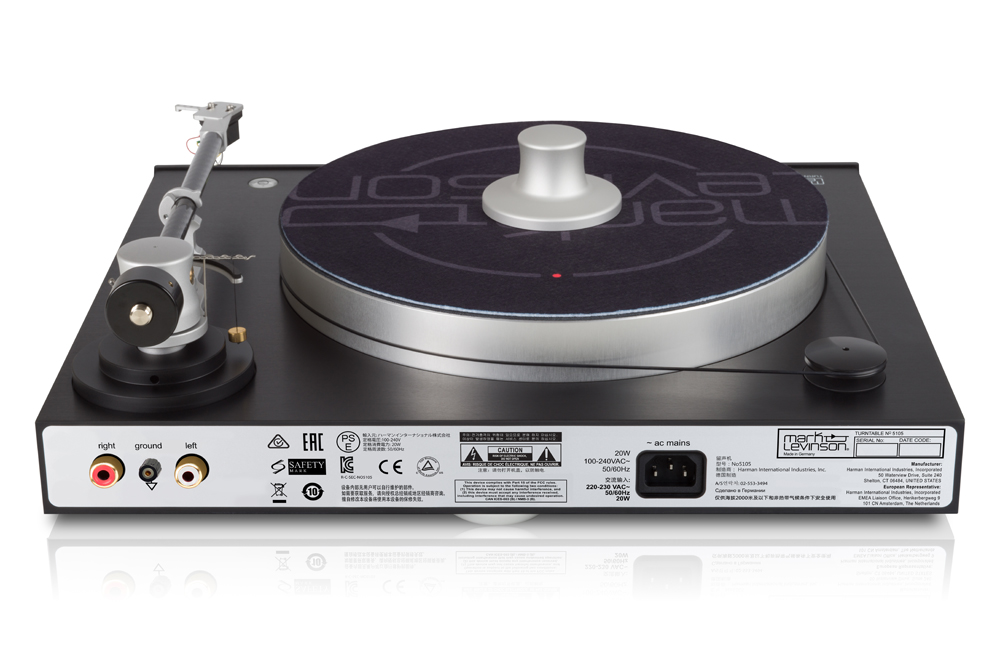 Three large aluminium and composite feet provide vibration damping and can be adjusted for levelling the turntable with the aid of a bubble level located on the top of the plinth. That rounds out the well thought-out adjustments required on this top flight turntable.

The № 5150’s rear panel also houses the RCA left and right outputs with an earth point at the rear of the turntable completing the socketry package.

The № 5105 MC arrived in a large double box package. Opening reveals a glossy 12 inch folder with a picture of the turntable on the front. Of course, inside you’ll also find the platter, mat and a four-page instruction manual which clearly lays out the steps required for unpacking and setting up. In addition to the turntable and its parts, the box contains a cartridge setup jig and a small vial of bearing oil.

After an easy assembly of the turntable the MC version just requires levelling of the platter/plinth and the fitting of the anti-skate thread and weight. The comprehensive instructions make setting up easy. The counterweight and cartridge are factory fitted for almost plug and play operation.

The manual suggests a 20 hour run-in period for the platter bearing and motor, so I left the turntable running for a day before giving it a serious listen.

In operation the № 5105 is very quiet and easy to use. I plugged the turntable into the system which consists of a Music First Audio step up transformer followed by a two-box tube phono stage from American company EMIA. The preamplifier is a PS Audio BHK and amplification duties are performed by a refurbished Leak Stereo 20. Speakers are the venerable Yamaha NS 1000M's with an unbranded custom 18 inch subwoofer.

First up for listening was Ingram Washington’s What a Difference a Day Makes on the STS record label. Washington covers some of the crooner classics and it is a very well recorded audiophile LP. On first listen the stereo image was leaning to the right of the soundstage with a slight lack of detail and dynamics. So I setup my AnalogMagik software and noted the azimuth readings… the left channel was -20dB and the right -28dB. 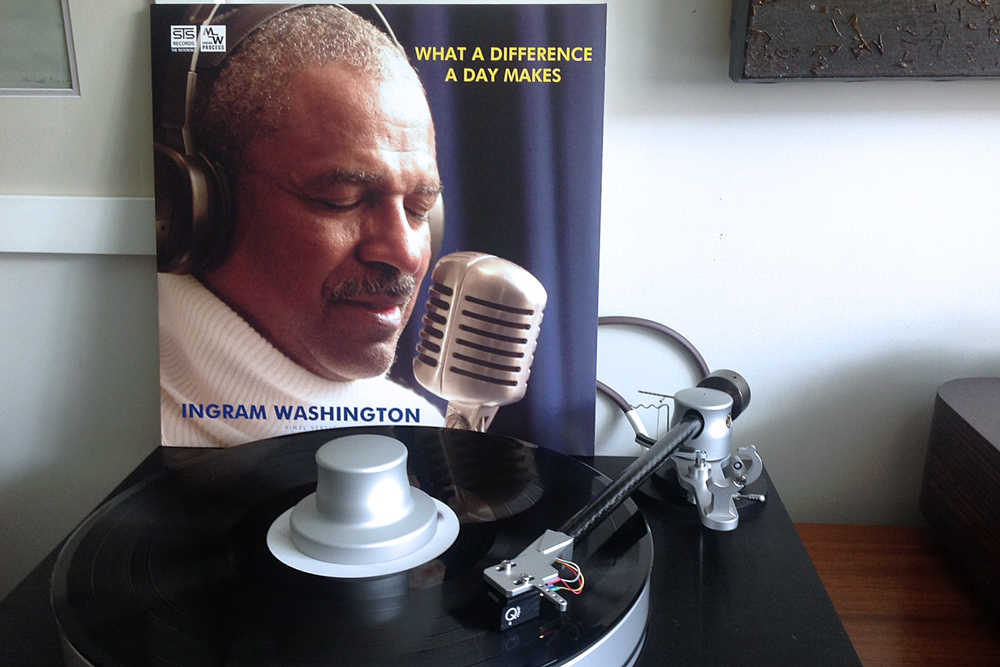 These values, of course, should be as close as possible and the higher the figure (quieter in this case) the better. After some adjustment I got the following figures: left channel -24.75dB and right channel -24.07dB. Much better.

Now back to listening to the Ingram Washington tracks. Washington’s voice now comes from the centre of the soundstage, with drums slightly to the right, the sax to the left and all was sounding wonderfully natural and clear. The lightest touches on the cymbals were coming through clearly. The double bass notes and piano flourishes were easy to follow, the percussive nature of a well recorded piano was striking!

The dynamic range was wide, plenty of deep bass, the baritone of Washington’s voice was a pleasure to aurally bask in. The brush work on the cymbals from “My Funny Valentine” was very detailed showing the resolving power of the shibata stylus on the Ortofon Quintet Black S. The soundstage on this recording was tall and wide with a 3D image projecting from beyond the speakers. A good sign that the cartridge was reading this disc very well.

Next up was a 1959 recording on the Columbia label Tchaikovsky’s Swan Lake and Nutcracker Ballet Suites conducted by Wolfgang Sawallisch. This is such a wonderful recording bought back to playing condition after using the 'VRC Method' cleaning system (see the Editor’s Comment piece on this here).

The “Waltz in A Major” had the gentle lilt of flutes followed by the crash of cymbals and timpani drums. Micro details of violins swirling through the dance tempo was truly lovely and the dynamics were astonishing for a 60 year old recording. No trace of sibilants was heard which can be a problem in a poorly set-up cartridge with a shibata stylus.

The “March” The Nutcracker Suite had the flutes, oboes sounding realistic with gentle hits of the triangle ringing clearly on the recording. Trumpets and swirling double bass brought in the “Dance of the Sugar Plum Fairy”. A real pleasure to listen to and a pleasure only a well set-up top tier turntable can bestow.

Then, something a little harder and modern. In 1996 DJ Shadow released his debut LP Endtroducing. The album took two years to make and contains some great drumming tracks sampled from various records that DJ Shadow had collected. “This will give the № 5105 something to get its teeth into”, I thought to myself. 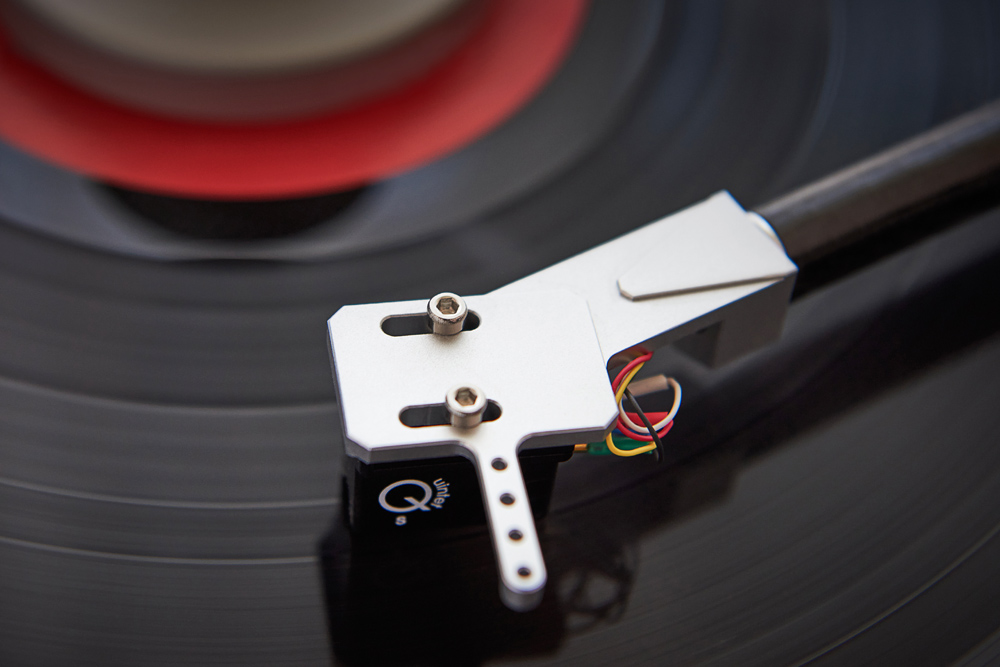 The second track “Building Steam With a Grain of Sand” starts with a vocal sample before kicking in with the drums. And kick it certainly does, with no shortage of bass reminding me of one of the many qualities of the much more pricey DS Audio optical cartridges.

Both extremes of the frequency range were clearly produced with speed and power. The high mass of the № 5105’s platter is very present with 'Speed and Stability' reminding me of the sort of power I get from the big Technics direct drive the SP10 mk3!

“The Number Song” track projected wide, stabbing synth notes which extended well beyond the width of the speakers. This dense mix never lost its detail and resolution, nor became muddy, as can happen with lesser turntables. The clarity of the Ortofon Quintet Black's shibata stylus certainly helped here.

Turning my attention now to the performance of the № 5105 at 45 rpm with Mobile Fidelity's box set release of Miles Davis Kind of Blue. This is an iconic recording from 1959 and showcases musicians at their peak of playing. Adjusting for a slight increase in anti-skating was easily done with the thread and weight system of the № 5105 and I was rewarded with a fresh take on the first track “So What” with Paul Chamber's bass sounding natural and detailed, with plenty of depth and power. Miles Davis’ trumpet sounded brassy and clean with great resolving power. The same resolution applied to the gorgeous saxophone that kept my attention on the wonderful lyricism of the track. Bill Evans’ piano provided a fine counterpoint to the cymbals and drums and I found myself tapping my foot in time while lost in the resolving power of the performance. A top portrayal of this wonderful album made effortlessly by Mark Levinson № 5105.

The Mark Levinson № 5105 turntable ticks some very important boxes. It is a stable transcription turntable. The bespoke tonearm is fully adjustable to squeeze the best out of whichever cartridge is mounted on it (as it does with the packaged Ortofon Quintet Black in the ‘MC’ version). It is easy to use, superbly-built and very elegant to look at. It is a serious piece of equipment worthy of carrying the famous Mark Levinson brand name. 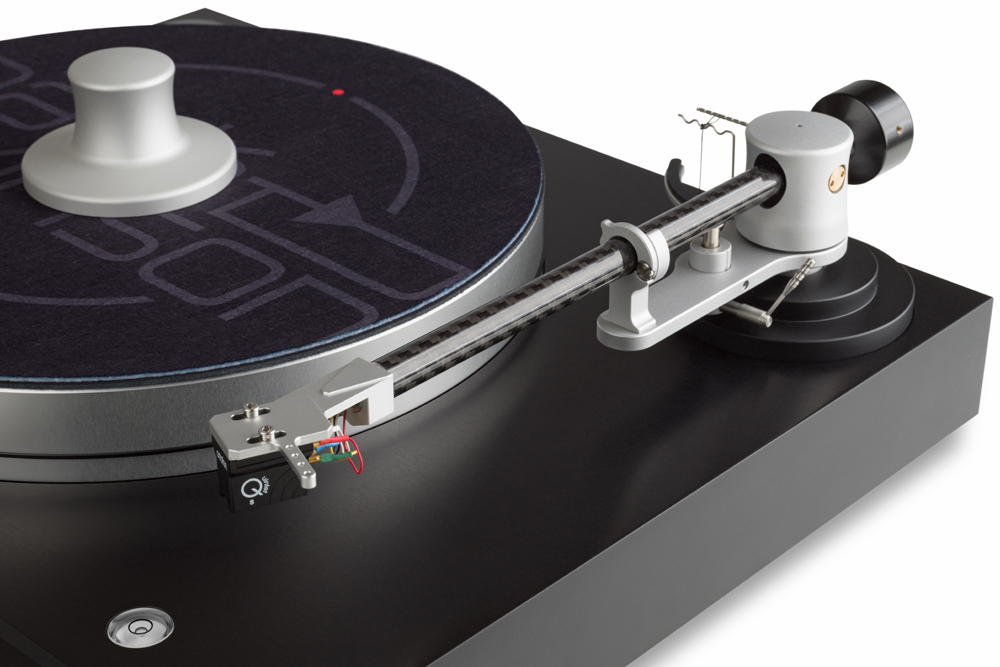 Is the № 5105 MC a plug and play turntable? I would say that this particular sample was plug, slightly tweak and play. But, as any vinyl lover who likes to adjust and tweak would know, there is a lot of musical information waiting in those wonderful vinyl grooves. Taking it even further, if you have the knowledge, gear and patience you can extract even more from any quality turntable. Go ahead, the № 5105 MC will pay you the dividends.

And that’s why I love playing in this vinyl rabbit hole!