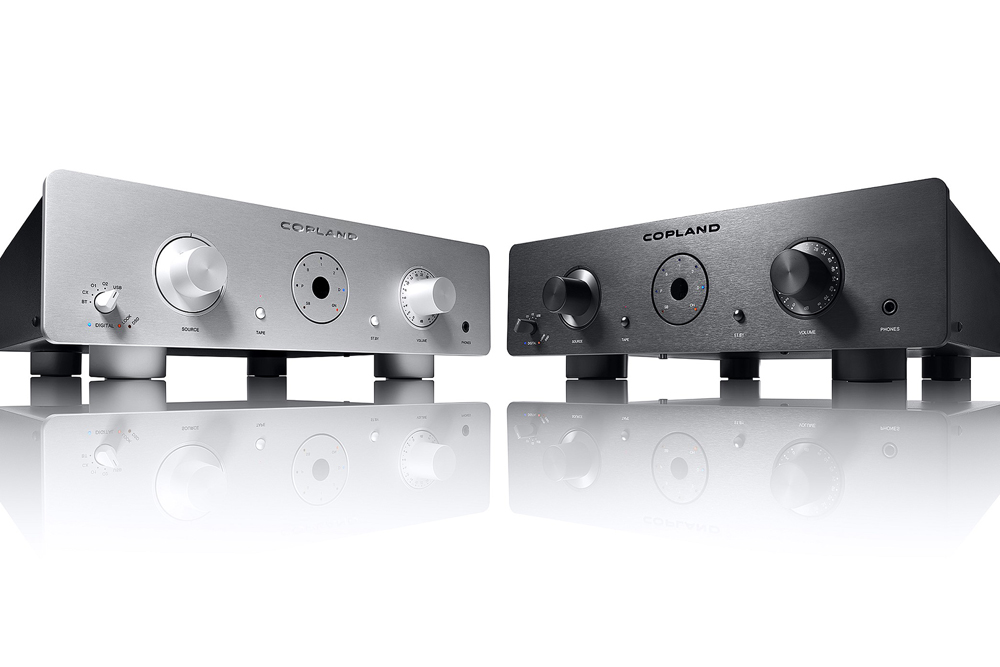 Copland is a Danish electronics company. Its products consist of integrated amplifiers, preamps and power amps, along with a high-end DAC. Most of the amps are valve-based. But the CSA 100 seems to be the entry level integrated amp and is a hybrid model. That is, line amplification is handled by a single double-triode tube, with a MOSFET circuit providing the grunt needed to drive loudspeakers.

How much grunt. Three figures for specifications for the amplifier were delights to my eyes. First, the rated output is 2 x 100 watts into 8 ohms. That is, I guess, unremarkable, until you see that the rated output into 4 ohms almost doubles to 2 x 180 watts. And you see that the rated minimum load of the amplifier is a mere 2 ohms. Copland has clearly provided a top-notch power supply – you can see the large toroidal transformer through slots atop the unit. And it has confidence in the amp handling even very difficult loudspeaker loads.

The mixing of tube and MOSFET kind of encapsulates the way this amplifier mixes the modern and the classic. Consider the inputs. There are three sets of RCAs for line level input, along with two XLRs for stereo balanced input. Two of the sets of RCAs can be dialled up with the large Source knob on the front, as can the XLRs. The other set of RCAs is labelled “Tape In”, just like my old Rotel RA-810 amplifier from the 1970s, and every mainstream stereo amplifier through the 1990s. You press the “Tape” button on the front panel to use it. (Back in the day, it was as likely as not labelled “Tape Monitor”).

On the back is a pair of RCA pre-amp outputs. They are under the command of volume control. Next to them is a pair of RCA outputs labelled “Tape Out”. Yes, there’s a proper tape loop. Not that anyone has a tape deck these days, but you can repurpose both of the tape inputs and outputs. 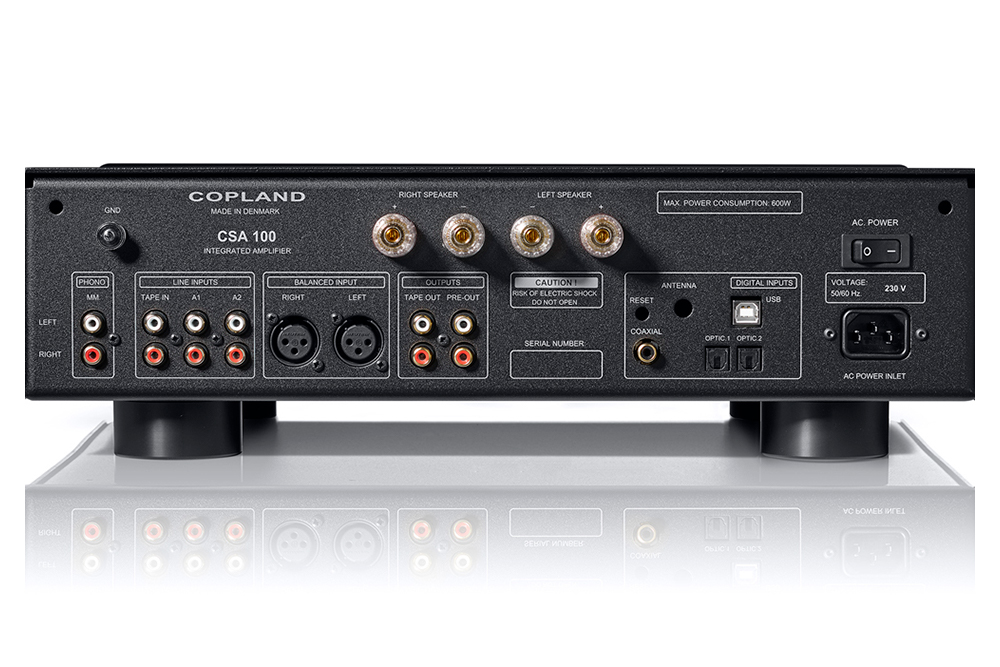 But there’s also a stack of digital stuff. The main source selector only has one “D” marking for digital input. Selecting between them is relegated to a smaller five-position rotary switch to the bottom left of the front panel. That panel, incidentally, seems to be carved out of an impressive slab of solid aluminium, with “Copland” machined deeply into it. The build of this unit was superb.

One of those positions is for Bluetooth, but that is an optional extra. If you fork out for it, you get close to the best Bluetooth has to offer with support for the aptX HD codec. The other positions are for the two TosLink optical inputs, the one S/PDIF coaxial digital audio input, and the USB input. The coax and optical inputs support PCM with up to 192kHz sampling. I simply plugged the optical digital audio output of my Denon streamer into one of the TosLink sockets to allow the Copland CSA 100 to perform DAC duties.

The USB Type-B input allows the Copland CSA 100 to act as a USB Audio device (USB Audio Class 2.0) for a connected computer. The downloadable drivers for Windows computers support ASIO, which allows direct communication between the suitable player software on the computer and the DAC in the Copland. That in turn allows support for very high resolution PCM audio as well as Direct Stream Digital. Drivers aren’t required for Macs.

The Copland CSA 100 uses the 8-channel ESS Sabre ES9018 reference DAC chip for the digital-to-analogue conversion. Each stereo channel is handled by four channels of chip. This configuration extends the dynamic range to a theoretical 135dB. Copland says that it can handle digital audio from 16- to 32-bits at sampling rates up to 384kHz, and Direct Stream Digital in regular and double speed versions (ie. DSD64 and DSD128). As we’ll see, it’ll go beyond that.

In general, I am keen for computer-connected DACs to report in some way the actual digital audio standard they are receiving. With some computer and software combinations – oh, who am I kidding here! – with most computer and software combinations it’s very easy to get the settings slightly wrong, and accidentally send lower-resolution audio to the DAC than you intended. I for one don’t trust myself to pick the difference by ear. The Copland CSA 100 doesn’t relay information on sample rates, but it does have two small LEDs on the front panel near the digital input selector. One is labelled “Lock”, and it lights up whenever the digital signal is locked onto. The other is labelled “DSD”, and it illuminates whenever the system has locked onto any Direct Stream Digital signal. 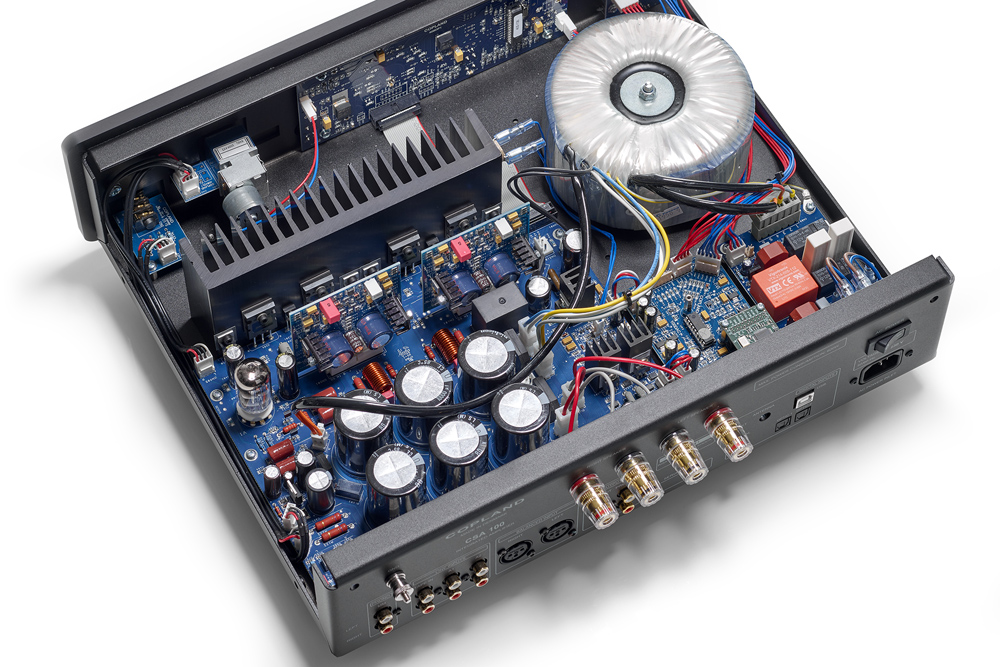 That’s good enough. Even if you don’t have any DSD tracks in your digital collection, you can go here and download a couple of free ones. If you use software like the JRiver Media Centre or Foobar 2000 to send it to the DAC and the DSD LED lights up, you can be confident that you’ve set things up correctly and your high resolution PCM tracks will be delivered properly.

One last thing before I start relaying listening impressions: the Copland CSA 100 was impressively fast at latching onto digital signals. It’s a small thing, but not missing the first half-note of a piece of music is an important contribution to one’s musical enjoyment.

Most of my listening was conducted with two sets of speakers. One set was the VAF Research Signature i93 speakers mentioned in the Associated Equipment list below. The other was a pair of Yamaha NS-3000 2-way speakers with their matched stands, temporarily in my custody for a forthcoming review.

Sometimes I almost need to pinch myself to make sure I’m not in a dream. I know, vintage audio has its enthusiasts, but the reality is that the quality of high fidelity has increased by stunning levels since 1977. Why do I mention 1977? I was flicking through my LP collection and came across the old Sherbert pop album Photoplay. It’s dated 1977. I bought it way back then for just one track: “Magazine Madonna”. I set it to spinning on the Rega, and this 43-year-old piece of vinyl startled me with the solid bass and surprising amount of detail. Braithwaite’s voice was a little screechy through the Yamaha speakers. I suspect the engineering – they may have tweaked it for a bit more bite. (Brief pause: I played the track from Spotify to check, and yes this screechiness is in the source.) The next track – “Midsummer Madness” – was smoother in the vocals. It’s a weaker song, but there was a surprising amount of transparency on the drum kit, especially in the funkier middle section. The vocals were pushed back on the sound stage for this track. 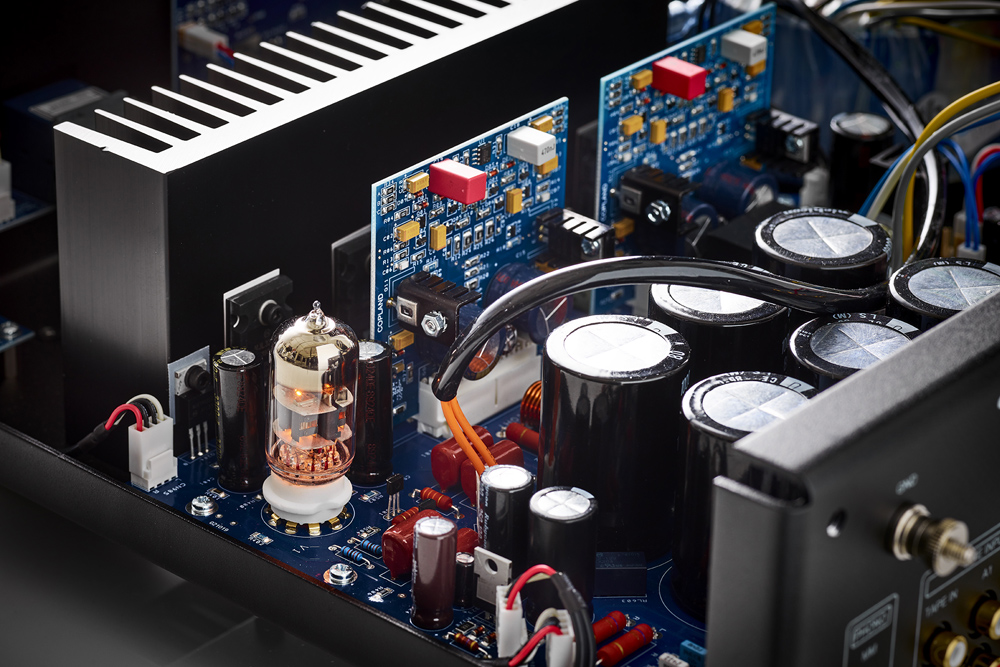 Sticking with the same era, but from a somewhat different genre, I moved to King Crimson’s album Starless and Bible Black. I have that on vinyl, too, but this time I played a 24-bit, 96kHz remastered version, streaming from my network storage via the Denon streamer and fed to the amp via optical digital audio. The track “We’ll Let You Know” builds a song from fragments over the course of its 3:35 and demands tight phase coherence for the best performance, since it’s so very dependent on Bill Bruford’s percussion. When the full drum kit kicks in more than half-way though, I didn’t even try to suppress the thrill. The Copland CSA 100 of course kept itself in order, but it also kept the speakers in order. I ran this music on both the Yamaha and the VAF speakers. The former are more accurate but the latter provided a slightly more dynamic delivery, along with at least an octave more bass (as you’d expect being a floorstander). The amplifier kept the kick drum tight and controlled even on the VAF speakers, despite their low impedance.

Laura Marling’s 2013 album Once I Was An Eagle is very different from both of the foregoing, as a largely acoustic recording. So I went back to analogue and used the vinyl version. The results were a real delight. There was remarkable stage depth, with Marling at the front with her close-miked, verging-on-overload vocals. At the back were the conga’s (I think, something of the kind hand-struck anyway) with the guitar and some other instrumentation spread across a plane between the two. There did appear to be a harpsichord-like instrument going there, with each little pluck (perhaps real, perhaps synthesised) sitting there in space when I focused my attention upon it.

I played some more female vocals, but these ones highly-produced and atmospheric: the most recent album by Aphir, Republic of Paradise. I played this one from Tidal on a Windows computer plugged into the USB connection of the amplifier. The Windows drivers can be downloaded from the Copland website. They installed quickly and easily, and once done the computer readily recognised the amp. Back to Aphir. Again, the delivery was exceptional. Her sweet voice – a little less processed than usual – on the title track was delightful. The Copland CSA 100 delivered the deep bass – slower, more ambient – with a certain luxurious smoothness. 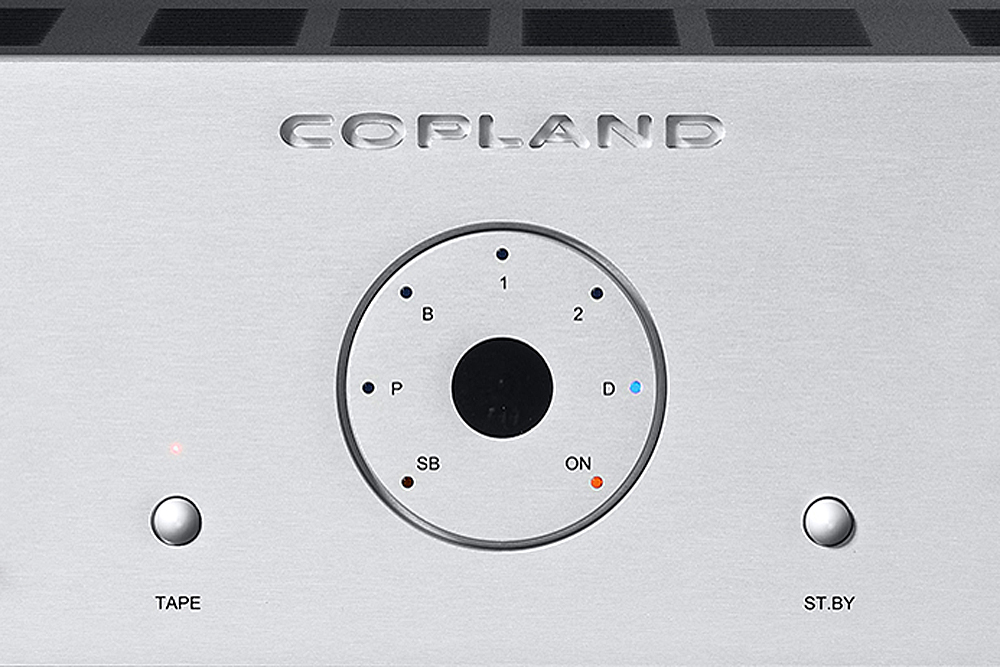 I experimented a bit with the various audio standards using the USB/computer connection. Obviously, things like 16-bit, 44.1kHz signals worked perfectly. But so did all PCM content I had up to 24-bits and 384kHz sampling. Although, that last did prove a little problematic because after a minute or so my computer would throttle itself down to a low power – which equals low performance – mode, whereupon the signal would start breaking up. I’d have go over and interact with the computer to kick it back to full power again. You will need to fiddle with the power settings on your computer in order to avoid that.

DSD worked both natively and in DoP (which is DSD disguised as PCM) formats for DSD64 and DSD128. And it worked nicely (native only) even in DSD256. It tried to work with DSD512, but kept losing lock. This may have been my computer running out of oomph.

Somewhere along the line I have collected several high-resolution jazz tracks created by Hong Kong producer Kent Poon, recorded in 24/384 and DSD 128. All were beautifully rendered. 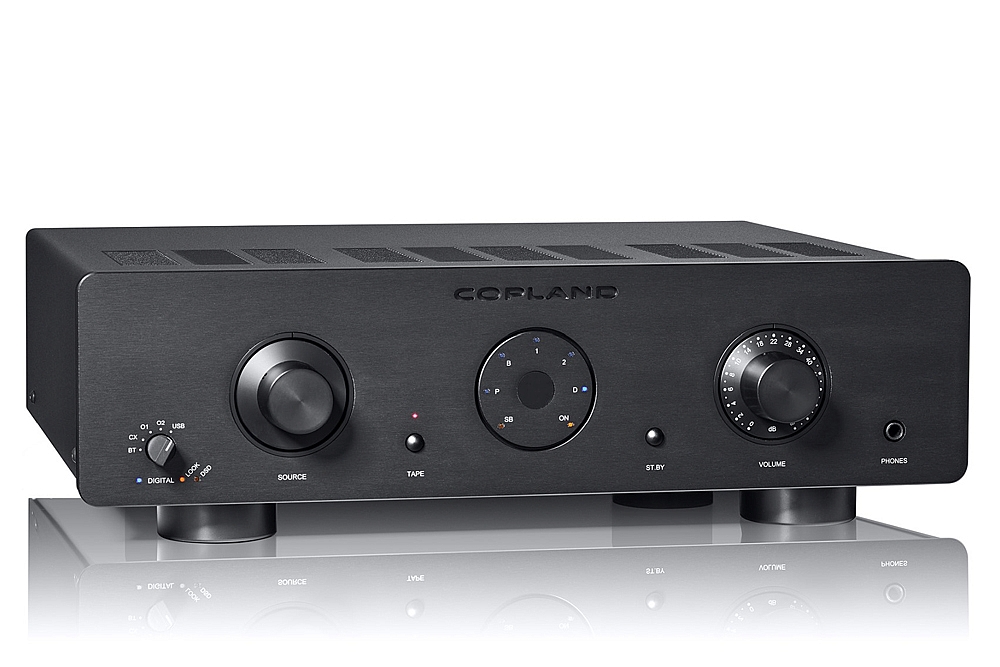 The sound delivered by the Copland amplifier to my Focal Elear headphones (impedance 80 ohms) and to my Sennheiser HD 560S headphones (impedance 120 ohms) was superb. Powerful, seemingly unlimited, and magnificent in balance. Detail was there, bass was extended. The overall tonal balance was fairly solid with my Oppo PM-3 planar magnetic headphones (26 ohms), although they seemed a trifle less focused than with my usual headphone amps. The Audiofly AF180 Mk 2 in-ear monitors are a recent acquisition. With a good portable player – something from Pioneer or Astell&Kern for example – they sound astonishingly good. But with the Copland CSA 100, the sound they produced was particularly poor. I kept switching them between the Copland and my headphone amp, just to double, triple, quadruple check. The main problem was that the frequency balance was all over the place, with undue emphasis on the upper midrange, such that there was audible hiss and a sort of thin, pinched quality to many instruments. And there was a simultaneously weak bass and recessed cymbals. You see, their nominal impedance is just 16 ohms, and (like many headphones) it varies according to frequency. These are three-way models, so the variance is quite significant. That messes up balance.

If you have favourite headphones, take them with you to audition this amplifier. High impedance models should sound great. Low impedance ones may not.

The Copland CSA 100 Hybrid Integrated Amplifier is one of those rare pieces of audiophile gear: it delivers the highest level of sound quality, yet works smoothly, easily, without any fuss.