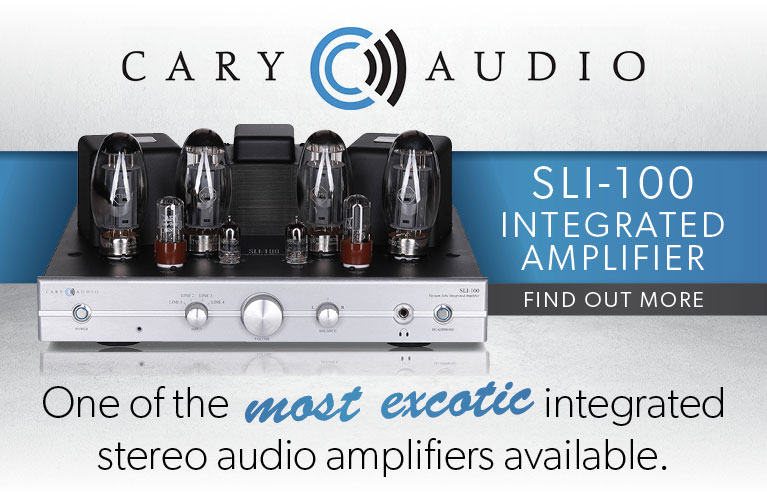 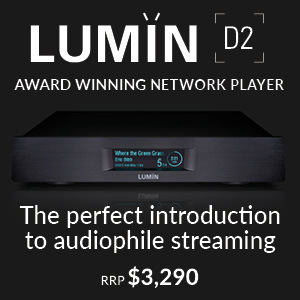 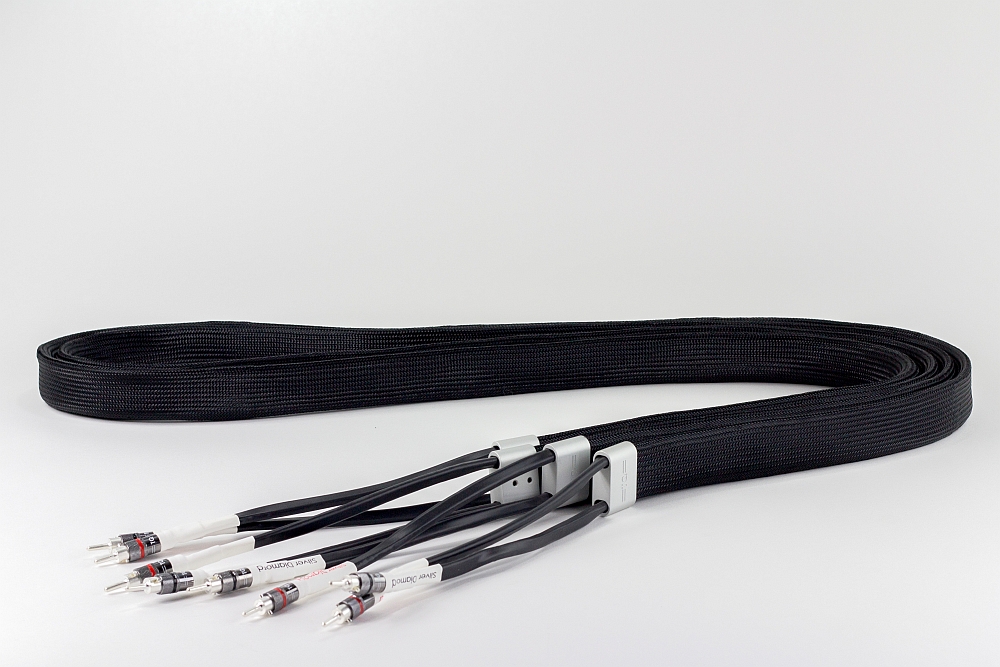 Wikipedia states that Tellurium is one of the rarest elements on Earth and was discovered in a mine in Romania in the late 1700s. The article goes on to say that, when in crystalline form, it’s a ‘metalloid’ semiconductor that is very efficient at transmitting signal in a specific direction while being resistant to oxidisation. These are all aspects rather well-suited to the makings of a really good audio cable…

The Tellurium Q Silver Diamond loudspeaker cable, for review here, is stationed at the company’s upper echelon. In fact, the Silver Diamond is only topped by the ‘Reference Line’ which – at the time of publication – offers a single model choice in speaker and interconnect cables.

The Silver Diamond’s ribbon-style design features a flat-ish profile, rounded edges, a solid construction underneath the plain black dress sleeve and a considerable weight overall. Whatever concoction of material/s Tellurium Q is using (the company discloses very little in terms of any of its cables’ make-up), there’s a considerable amount of it in the Silver Diamond.

Managing Director Geoff Merrigan states on the company’s website that Tellerium Q eschews the “pointless chasing of 9s”, referring to the ever-growing decimal point shifting in 99.99999 percent purity claims. He also mentions that possibly the most important aspect of Tellurium Q’s cable designs is the minimisation of phase distortion. He admits, rather boldly, that all cables are “electronic filters” and that the task of a cable designer is to minimise the deleterious effects inherent in all cable designs. 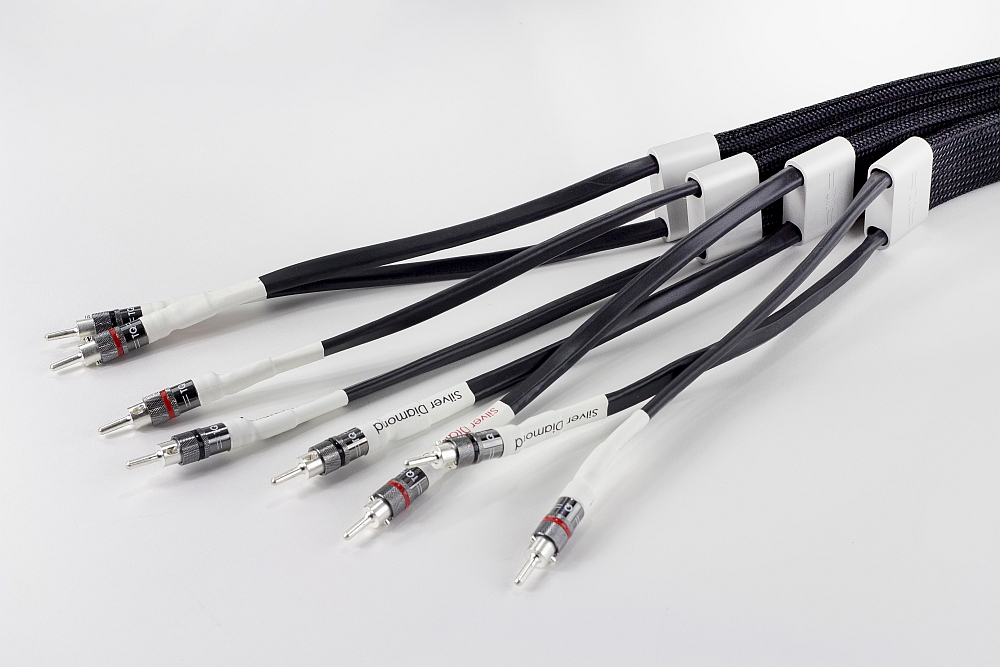 TQ states that its designs handle phase distortions in such a way that they reduce the “smearing” that is caused by timing shifts. The claim is that by reducing these, the cable allows for better transparency and clarity in terms of sonic performance. Admittedly, with my limited knowledge of cable design I would, perhaps naively, question whether these time shifts or “smearing” of nano-time differentials would be audible within the audio band. However, I concede that signal transmission is not an area I’m schooled in. And as will be covered below, if the performance is there, then perhaps that’s all that matters… or, there may indeed be something behind the concept after all.

TQ went to some length to engineer the design of the connectors too. A listening panel was assembled to conduct double blind listening tests in order to ascertain whether there was a performance difference between the company’s pure silver and silver plated copper connectors. It’s reported that the silver plated copper (in a specific plating ‘thickness’) was found to be convincingly superior in the extensive double blind tests. TQ goes as far as dedicating specific solder mixes for select cable models with the view that certain fusions of solder work more appropriately with select cable models.

So, the Silver Diamond is constructed most competently and features bespoke connectors of very high quality which are available in either lockable banana or spade terminations. The aluminium termination dress… plate, for want of a better word, is nicely machined and has been etched with the company’s TQ initials. Of course, this is just cosmetic enhancement, something that may be expected at the price.

Interesting is the demarcation system that TQ has adopted for its cable ranges which the company calls ‘Performance Profiles’. While the ‘Blue Range’ has been designed to sound slightly warm and full-bodied and the ‘Black Range’ is neutral and transparent, the ‘Silver Range’ can “… best be described as silver but without the fatigue and harshness that can go along with that material.” The take-away from that could be interpreted such that the ‘Silver Range’ may be very detailed, resolute and incisive, minus potential etch or brightness. 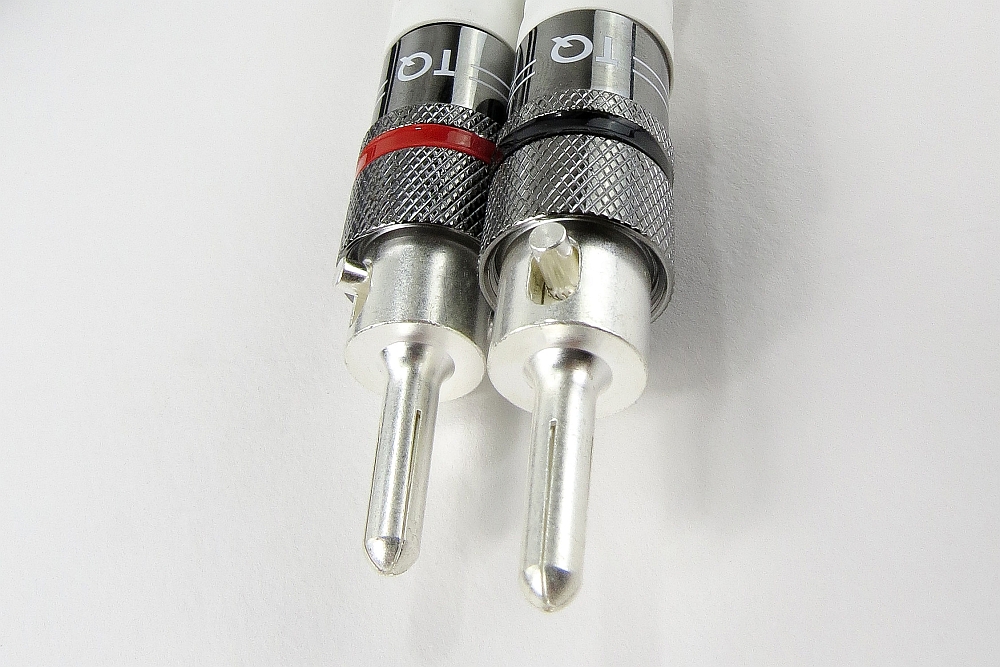 As mysterious and entirely subjective as the above may seem, curious punters may indeed be tempted to test the claims. And it’s with this same inquisitiveness that I approach this review. Will these assertions correlate with my findings?

Installation of the Silver Diamond is straightforward. The lockable banana plugs are well-made and fit snuggly into any quality binding post. Guiding the cable is also easy because, although quite stiff and rather heavy, the cable can be twisted and/or formed with gentle bends in order to settle it within the space available (within reason).

Prior to the sub-header above, I posed the question “Will these assertions [as stated by Tellurium itself] correlate with my findings?” Boy, did that question get answered once I fired up the system. It was during one of the first tracks I played, Bruce Cockburn’s atmospheric “Strange Waters” from his The Charity of Night album, that many of the signature strengths of the Silver Diamond were exposed. The album’s music came through with superb detail, a solid bass and precise instrument separation. “Strange Waters” is intro’ed with an ascending drum beat and, as the track’s tension builds, the power of the whacks reached tremendous force. But it wasn’t just slam and pyrotechnics, there was also a completeness and ‘trueness’ to the music… my thought has always been that when dynamics and tonality are right, you’re getting closer to the real thing. 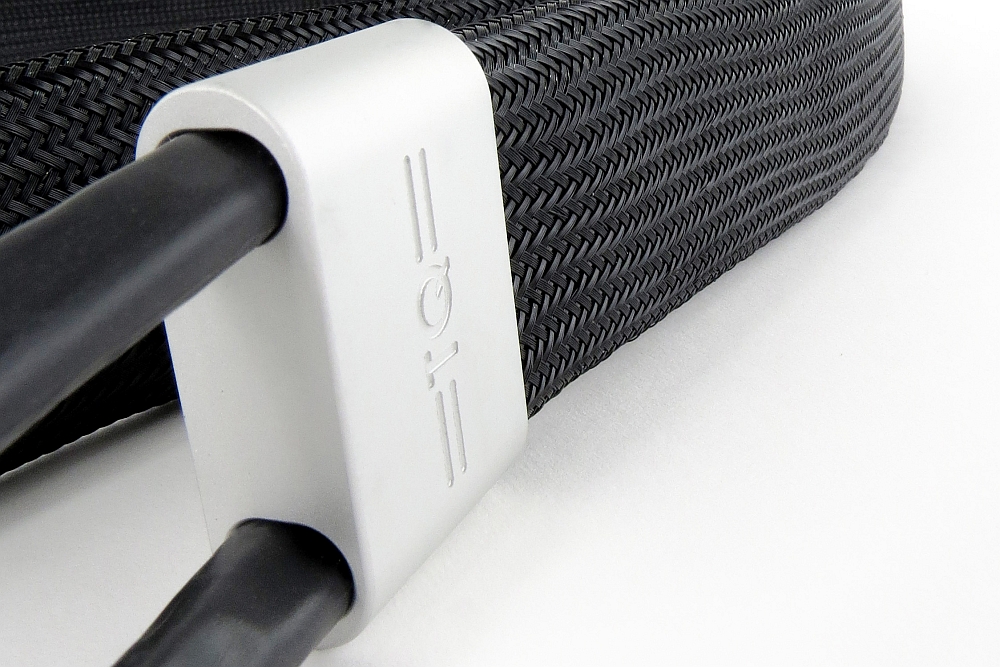 I was so impressed by what the Silver Diamond was doing with the bass – among other things, of course – that I started sifting through my music collection seeking out the best bass content. Out came Brian Bromberg’s Wood where the maestro’s robust playing technique and his dexterity were displayed in their full glory. Here was an impactful, tuneful, nuanced, dynamic and utterly believable representation of the acoustic bass, in a way that encouraged multiple plays. There’s control there too with the TQ allowing the full potential of the Gryphon Antileon EVO’s massive power supply and capacitor bank to tightly grip the Wilson Audio Alexia’s dual woofers (8 inch and 10 inch).

As good as the low-end was – and I auditioned many, many of my best bass recordings – equal excellence was carried through the rest of the spectrum. Silver Diamond excelled with voices, male or female. Ani DiFranco’s passion and fury were resolutely communicated on her masterful “Light of Some Kind” from the Not a Pretty Girl release. The singer’s voice was angry… and present and, also as a result of the rest of the system components’ competency, perfectly focused centre stage in a large soundstage. This recording can be somewhat sibilant and, if any item in the system – most certainly including the cables – is a tad out of relative balance, the aggressive edge on ‘Ss’ and ‘Ts’ will be displayed ruthlessly. The Silver Diamond, within the context of my carefully balanced rig, avoided any sibilance and presented this otherwise excellent recording in its true unedited form (as far as I know, having heard this in all manner of system contexts aside from my own). This taming of shrillness, I must stress, did not come at the expense of micro-detail or by injecting the inaccuracy of added warmth. The Silver Diamond is neutral and allows fine detail and nuance to be admirably communicated. 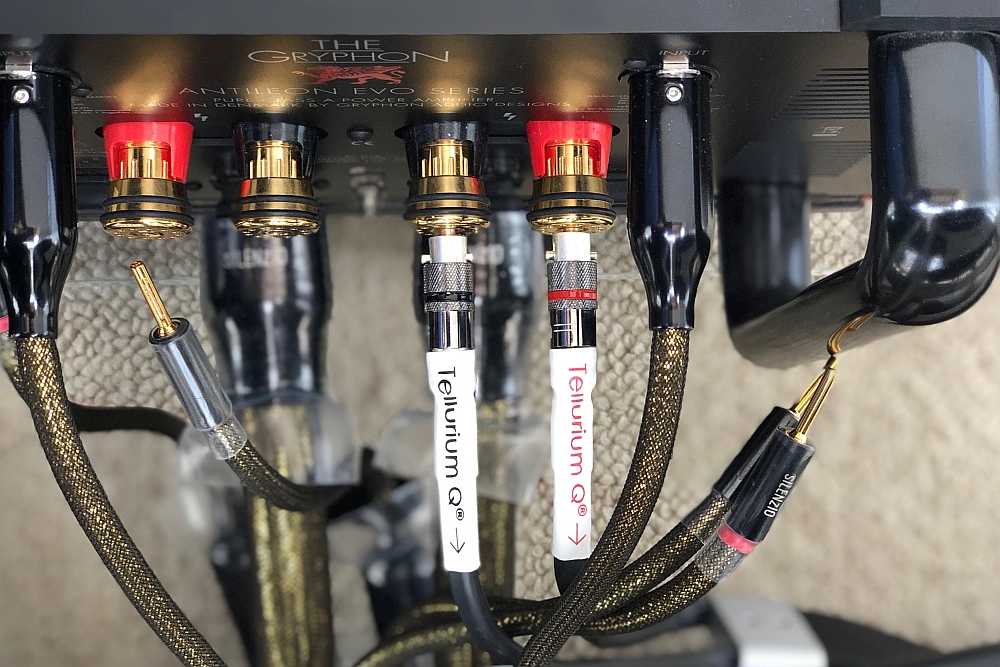 The cello, as played by master Du Pré on the devastatingly beautiful Elgar Cello Concerto LP (conducted by Barbirolli with the London Symphony Orchestra), sounded full-bodied and deep, with remarkable rosin-on-bow detail and tonal accuracy. Despite it being just an adequate recording, when music of such emotive power is replayed to this level of accuracy, the consequence can be a heart-wrenching experience. Indeed, the Silver Diamond expertly communicates, passes on the message, of the true beauty and the moving power of music.

Silver Diamond’s spatial performance did not intrude on the capacity of upstream components to faithfully project the soundstaging and imaging qualities embedded in the recording. In other words, they did no harm… or as little as a cable can within the restraints of the laws of physics. If captured in the recording, Silver Diamond will project the full panoramic breadth of the soundfield in all dimensions including the difficult to achieve height perspective (depending on your speakers’ capabilities). Stadium-wide is what I’d call Ryan Adams’ Live at Carnegie Hall CD. TQ’s Silver Diamond presented the singer at his post, singing and playing locked in via a focused, steady and full-bodied image. Not to mention his close-miked dynamic swings when the singer lets go, with the Silver Diamonds tracing the rise and ebb faultlessly. Great stuff here TQ…

To conclude, I’d have to reinforce how impressed I was, and how much I enjoyed, having the Tellurium Q Silver Diamond in the system. It is balanced, natural, and neutral and draws the best from your electronics and speakers. 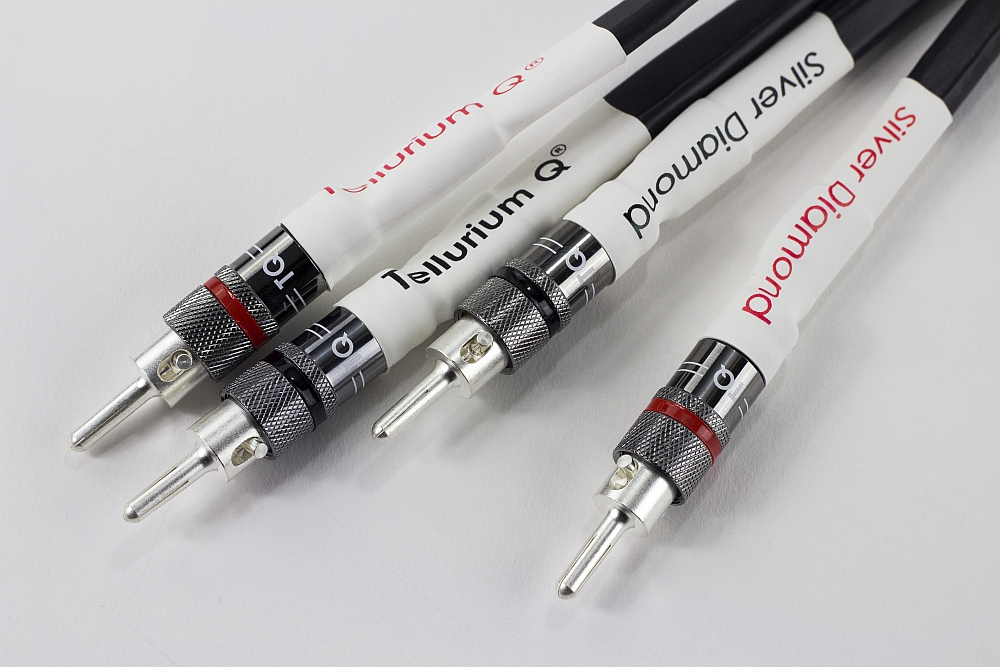 It adheres to the first mandate of any good cable: ‘Do no Harm’. If a cable imparts a colouration you enjoy, well that’s fine and dandy. However, that really means that the sonic qualities of the cable have marked the collective signature of the system it’s connecting. That is inherently flawed. Address the issue up the signal path. Given neutrality however – or as close as you can get to it, seeing that this is in absolute philosophical terms near impossible – a cable should convey the sonic signature of your system. In my view, Tellurium Q’s Silver Diamond is doing just that. No more. No less. Nailed it.