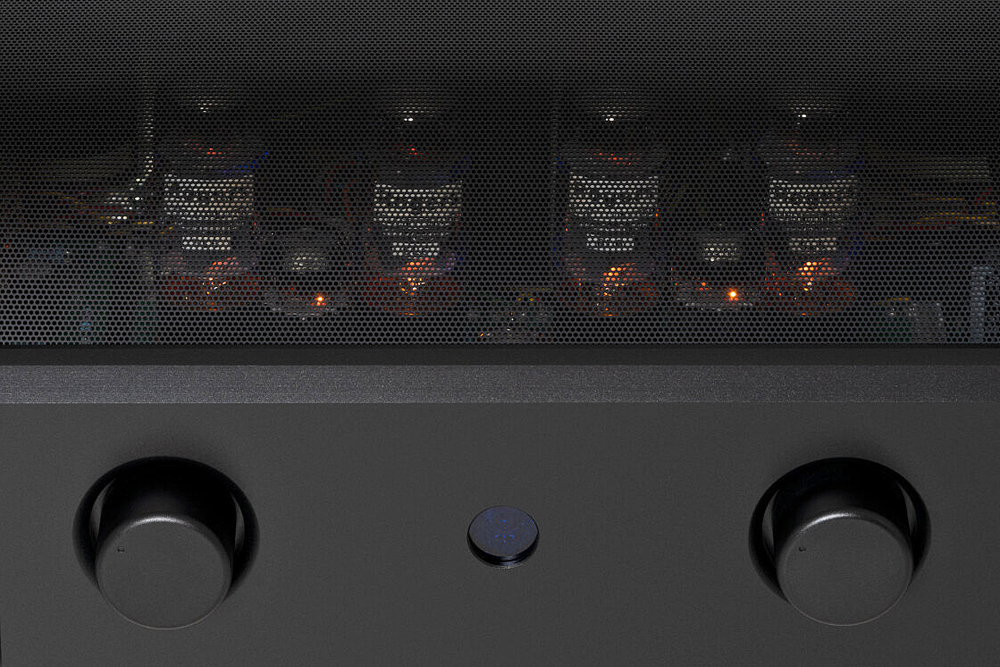 Rogers… the august brand name which invariably conjures the infallible LS3/5a, that BBC-commissioned little over-performing icon, that endearing beacon of small 2-way loudspeaker design. Less famed is the company’s release in the mid-1990s of the E20a, a bespoke valve amplifier targeted to wring the very best from the LS3/5a and, indeed, the company’s then growing stable of loudspeaker offerings. With the new E20a/ii, Rogers modernises the original concept while preserving the vacuum tube design that made its speakers truly sing. So now, going on 30 years later and in a far more expansive audio landscape, will the new iteration become a universal loudspeaker-driving companion?

It’s from a fiery nest of nine red-hot valves that the new E20a/ii rises… a 21st century Phoenix. The new amplifier even pays homage to the original’s style by retaining the distinctive protective bulbous metal grille screen while simultaneously simplifying the aesthetic. The original fascia’s multi-controller bank is now replaced with just two large rotary knobs. In fact, the only other item on the front panel is no adornment but a centrally-placed remote control receiver sensor and a ‘Rogers’ brand etched plate on the top right hand corner. Simple. 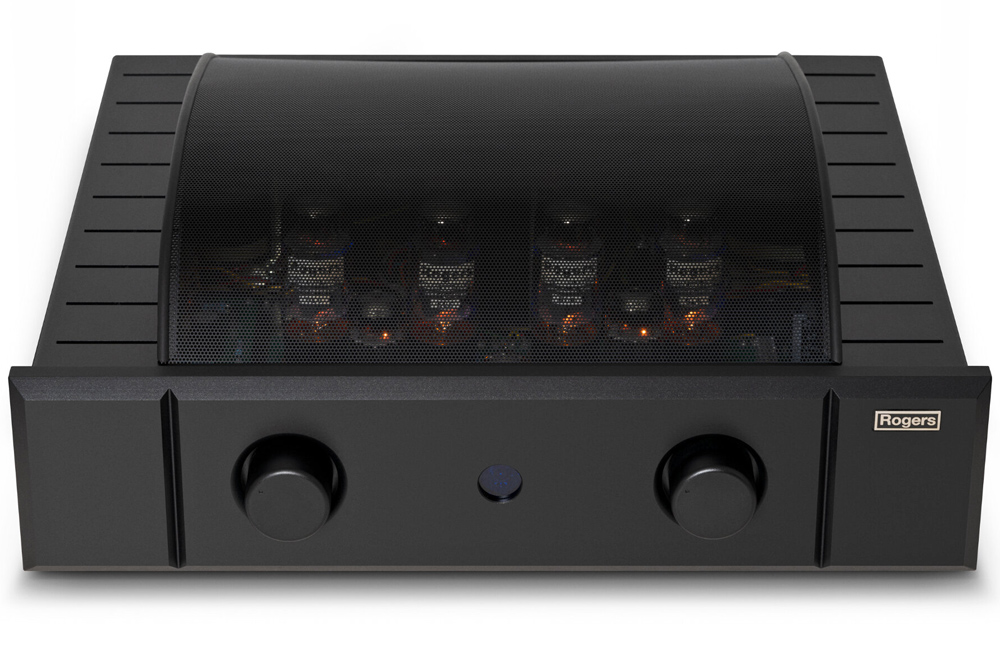 And yes, there’s a lot to be said about simple valve amplifiers. I’ve owned a couple, the last one being a single output valve Single-Ended Triode (SET) design of remarkable purity, stark naturalness and a musicality that, for me, were all transfixing. That’s the encapsulation of SET amplification right there. Perhaps not to the same boundless level, SET’s strengths can be approached by a competently-designed push-pull amplifier with the added benefits of that topology’s more intense drive, wider dynamics and higher overall power. The Rogers amplifier under assessment here is a shining example of those factors. But let’s not get ahead of ourselves, first let’s talk about the functionality on offer.

The control options are bare-boned. A simple set of twin knobs allotted to volume control and input selection flanking the circular infrared receiver window mentioned above are the only functional components in the chiselled and 18mm thick anodised front panel. Around the rear are a bank of hard-wired RCA single-ended sockets for four line inputs (or three line and one optional phono input which is Moving Magnet), provision for optional pre-outs, an IEC socket with spare fuse coupled to the on/off switch and a set of rather budget-ish-looking speaker binding posts (although they are silver-plated). The E20a/ii was supplied with a full function remote controller.

As mentioned above, styling is simple and purposeful while build quality is solid and the E20a/ii is handcrafted in the United Kingdom. The chassis seems well-assembled, is stated as being non-magnetic and its panels are heavy and nicely anodised. A curved grille mesh covers most of the amplifier’s top panel. Aside from protecting the fingers of inquisitive infants, it’s also preventative for clumsy adults with good intentions. No burns or electrocutions here. Even the grille’s edges are dressed with a rubber trim so as not to scratch or cut. Good thinking Rogers. 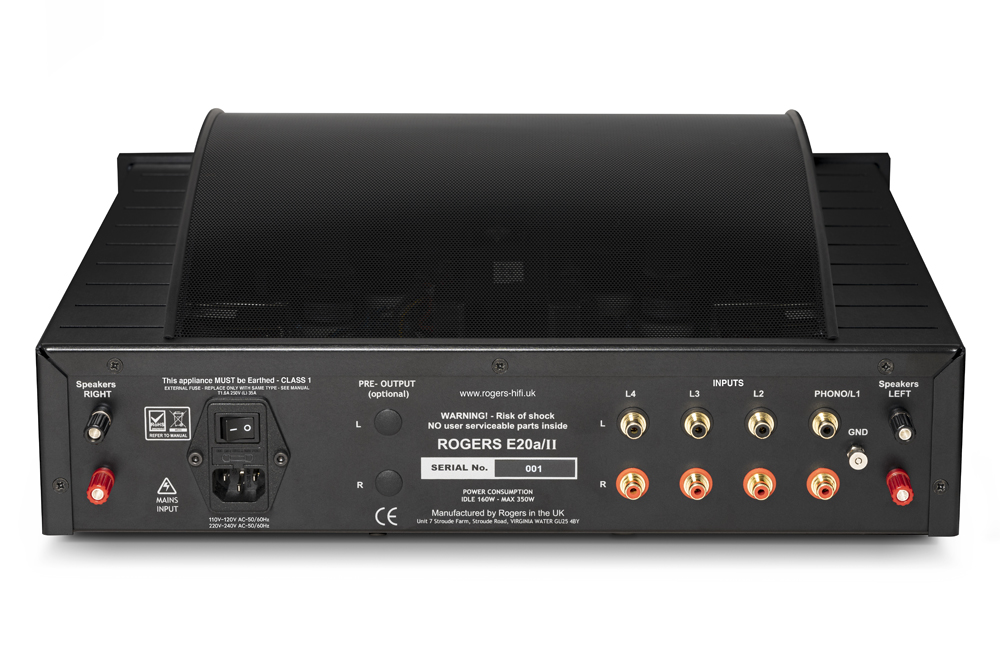 There are no frills, no superfluous LEDs, no provision for digital modules, etc. Rogers has designed an amplifier that will do… just that. Source switching, volume control and amplification. Nothing more, nothing less.

Peering through the grille, I noted a rather large mains transformer flanked by two smaller output ones and the four 6L6GT output valves which provide 18 watts Class-A of power per channel. Two 6SN7s are engaged as phase splitters while a 12AX7 is employed as anode follower. A further couple of 12AX7 valves are engaged in the phono stage version. All are monitored via a self-biasing circuit.

Rogers quotes the frequency response of the E20a/ii as 20 Hz to 20 kHz at +/- 0.5dB. The abovementioned 18 watts per channel are in Class-A and stated at 8 ohms and 1 kHz with a Total Harmonic Distortion (THD) of 3% which is relatively sizeable when compared against solid-state amplification. Having said that, valve amplification distortion behaviour is markedly different to that of solid-state amplifiers and their vanishingly low distortion numbers (0.000XX even). In valve amplification, even-order distortion (most commonly 2nd-order) is commonly associated with a pleasing sonic presentation with good ‘tone’ and ‘body’ alongside a modicum of warmth through the midrange. I suspect that was the intention and performance target of the E20a/ii designers. Indeed, my listening impressions correlated with those aims. 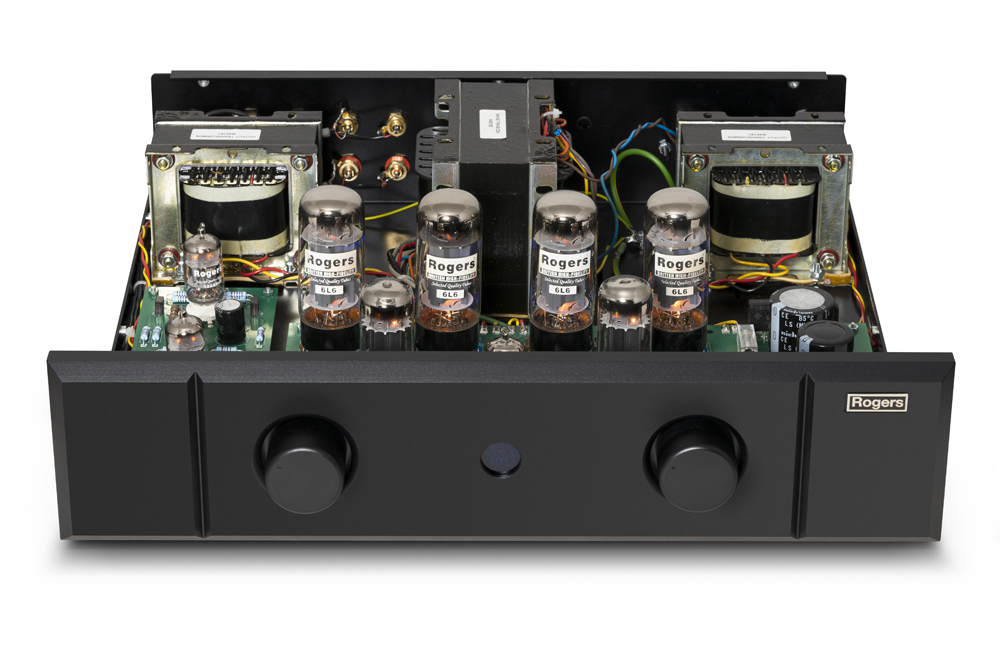 Rogers rates the E20a/ii as having a matched output for 8 ohms-rated loudspeaker systems. I expressed my reservations regarding matching this amplifier with my Wilson Alexia Series 2 to Aleksandar Maksimovic, proprietor of Australian importer Audio Magic. The Alexia S2 has a somewhat challenging load, dipping to below 3 ohms, coupled to tough phase angles in the bass region at around 85 Hz or thereabouts (from memory). Maksimovic assured me that, in his experience, the E20a/ii was relentless in its drive capabilities and it belied its conservative specifications. Through my audition period, again, as with the distortion figure quoted above, the hands-on actual experience seemed to repudiate the numbers on the spec sheet. There was no drive issue nor bass bloat nor dynamic restriction with the E20a/ii driving a number of high-end speakers in for review and with my own Wilson Audio Alexia S2.

Clichés emerge and develop for a reason. Often they are simplified truths boiled down to their basic core. In this case, the cliché goes that valves have an inherent warmth and full-bodied-ness. It’s that second-order distortion resulting in a sonic pleasantness which can delight a big cross-section of music lovers. Well, the Rogers E20a/ii encapsulates that cliché in all the right senses.

Yes, there’s a full-bodied impression of solidity across the midrange and down to the upper bass. Yet, in a complete disregard for its modest power rating, the E20a/ii also sounds potent in the way it expresses dynamic contrasts. It’s no shrinking violet. But neither is it a crude, bullish lout. Rather, it straddles the middle ground to a level where its substantial qualities are understated yet appreciated by astute listeners. Especially those in it for the long-term. 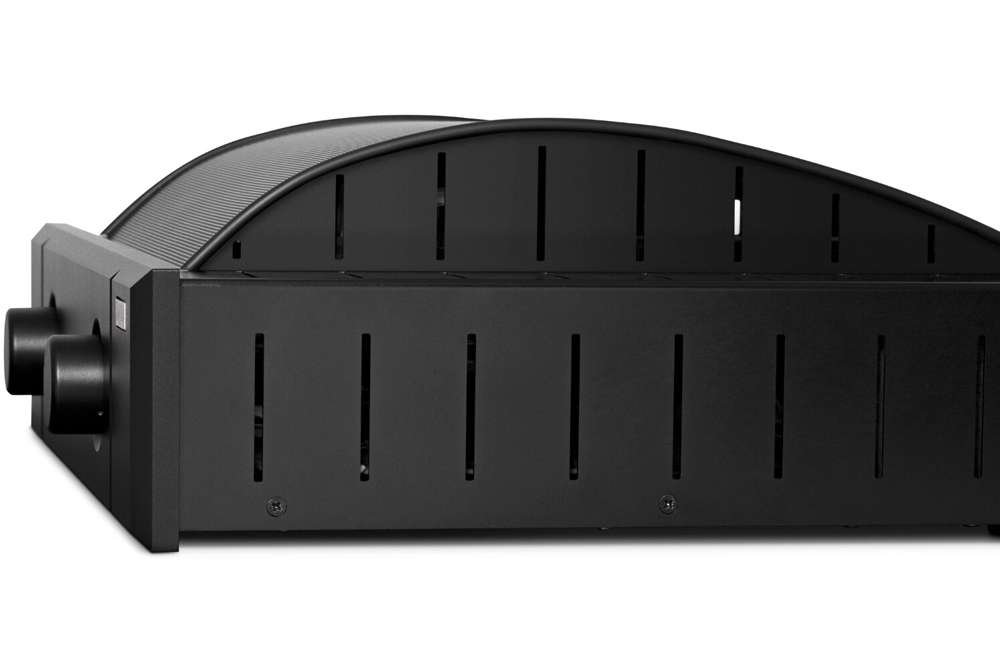 First let’s look at that “full-bodied sense of solidity” aspect. This came across most obviously via the vocal range, whether male or female. This led to a verisimilitude, an almost palpable presence of vocalists which placed them in relief to the instrumentation. Not in an objectionable, forward way, but more of a placement in space within a realistic image rendering. It was easy to picture the singer in the room, complete with an accurate depiction of dynamic articulation and vocal intonation. If you’re so inclined, the typical audiophile fare of Diana Krull, Norah Jones, Cassandra Wilson, etc. or Chris Jones, Doug McLeod at the other end of the scale (of course, there are non-clichéd examples that are just as demo-worthy-effective), provided evidence of the Rogers’ excellent vocal reproduction.

Impressive was the amplifier’s handling of Mick Turner and The Tren Brothers’ “Away” track from the Blue Trees album. There, Jim White’s close-miked kick drum, well… kicked quite powerfully and deeply (18 watts, you say? Nah). The occasional tom hit accent had the correct tonal signature and ‘hollowness’ which, when done right as it was here, was book-ended by a striking snap at the first hit and a long-lasting decay as the note fades. Harvey deceptively presents his playing as simple atmos-building but it’s also an oscillation, it intonates the flow and rhythm, becoming the ‘essence’ of each track. The E20a/ii played that without diminishing nor colouring the inherent beauty of the maestro’s playing (check-out “Angel, Pt.1” for simple yet pure guitar magic). Ditto for the super-dynamic recording of the snare on “Kit’s Choice”, where the drum serves as both an improvisational rhythmic accent and a forceful thematic emphasis, with the little Rogers punching quite satisfactorily, and rather surprisingly, in the dynamics department.

There’s an addictive sweetness balanced with excellent detail through the mids (again, that valve amp cliché). Eric Van Zant’s “Devil’s Neck” from the self-titled EP is a brash recording which can border on the side of leanness. Via the E20a/ii, this is ameliorated without harming the piece’s integrity. Van Zant’s steel-stringed guitar was incisive, detailed and tonally accurate, even if a little thin, being the nature of this recording. However, the Rogers amplifier will never – and I stress never – sound bright, all things being equal across the signal chain. 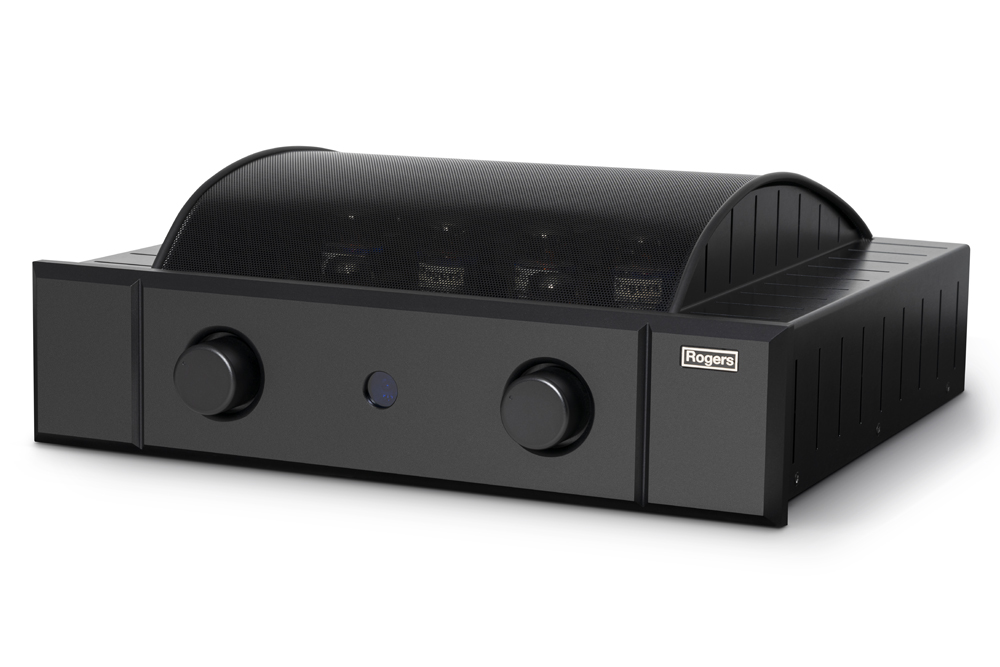 Coming back again to my beloved instrument the guitar, the E20a/ii handled the complexities of Sylvain Luc’s and Biréli Lagrène’s “Stompin’ At The Savoy”, from their Duet album, with the most beautiful and totally complete, tonal palette. The guitars sounded full and densely intricate while the minutiae of nuances and micro-details were relayed with excellent realism. There was no lack of dynamic expression too, as illustrated through passages when the guitarists played off each as they build crescendos in powerful ways.

My usual soundstaging and imaging references showed the E20a/ii could do spatiality without compromise. Be it Ani DiFranco’s Live in Clip, Jackson Browne’s Solo Acoustic Vol.1 and Vol.2, Ryan Adams’ Ten Songs From Live at Carnegie Hall, or that stalwart of Harry Belafonte’s At Carnegie Hall – The Complete Concert. All showed spacious ambience, superb venue decay, deep, tall and most notably very wide soundstages coupled to precisely focused images.

Sometimes paper specifications can pre-empt a story. In practice, when the outcome illustrates a different, even contradicting narrative, it can be surprising, as it has been in the case of this simple integrated from Rogers. It was unexpected that a plain 18 watter could perform so solidly, especially in terms of dynamics and bass output, while driving some pretty challenging loudspeakers priced well beyond its level. That is a credit to Rogers’ engineering team. 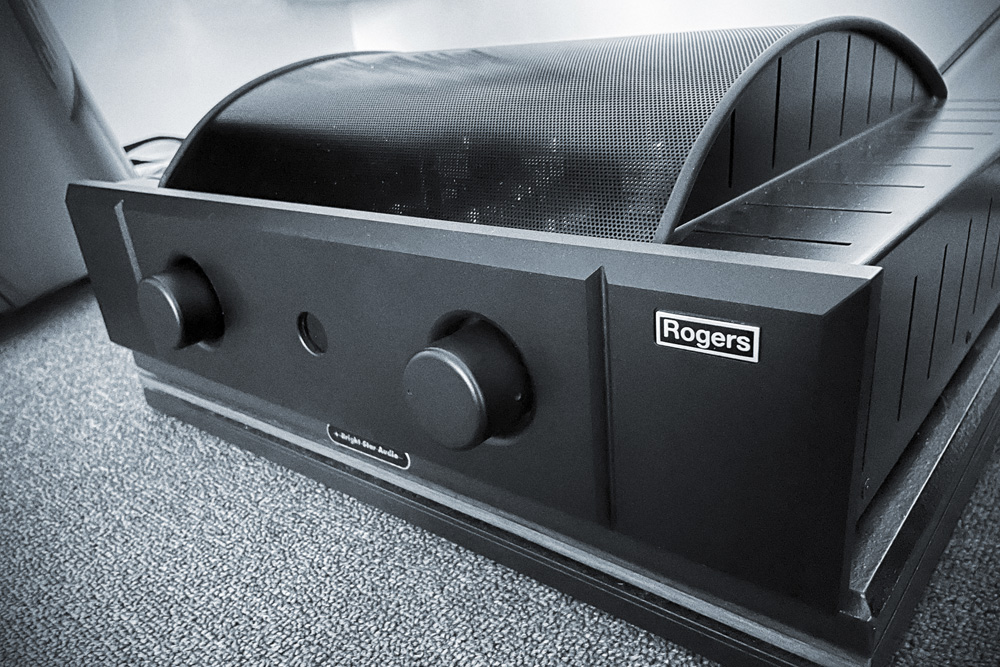 So to summarise, the Rogers E20a/ii is a solidly-built, pleasantly-styled and basic integrated with a cunningly-refined circuit which wrings the most from the modest rated output. It has a sweet, musical sound, with no lack of dynamic expression or detail, all combined with competent handling of the low-end. Its current production valve compliment is easily available while, overall, the E20a/ii promises material longevity and potential reliability. And when all is said and done, what more can you ask of any integrated amplifier?

I asked in the introduction whether, quite aside from its obvious synergistic relationship with Rogers’ own loudspeaker products, the new integrated amplifier would make for a more universal companion. Indeed, in my humble opinion, the E20a/ii will assertively go Ad Astra.