In general, audio signal transmission suffers from the tyranny of multiple individual fundamentals and even varied combinations of one-and-all. The tri-axis of impedance, resistance and capacitance form the elementary foundation for the conductors themselves, be it copper, silver, gold or cocktail combinations. Add the effects of the components’ own electrical parameters, the environmental effects of interference and, down the line, the loudspeaker’s own inherent demands and you have a whole lot of variables which the signal conduit must address, adapt and comply to. Permutations of these factors are the reasons why cables can sound different from one system context to another. When it comes to signal delivery, AudioQuest knows its LCRs. The company offers a profound level of choice covering every possible scenario. Do the upmarket William Tell ZERO loudspeaker cables sling the signal-arrow straight to the heart of the music?

Started by William E. Low in 1980 (it seems incredible that we’re talking 42 years ago! Near enough to the genesis of high-end audio), AudioQuest’s first products were the foundation for signal connectivity at Low’s audio specialist store. With his designs’ successfully accepted among audio enthusiasts, Low made the decision to embark on a larger scale cable manufacturing endeavour. The aim was to produce signal transmission cables of the highest accuracy by research into materials technology. Soon after, he followed on by adding phono cartridges to the company’s expanding production portfolio. However, it was Low’s explorations and dedicated research into advanced materials and conductor configurations which led to the very early adaptation of long crystal copper conductors and AudioQuest’s proprietary ‘HyperLitz’ construction. 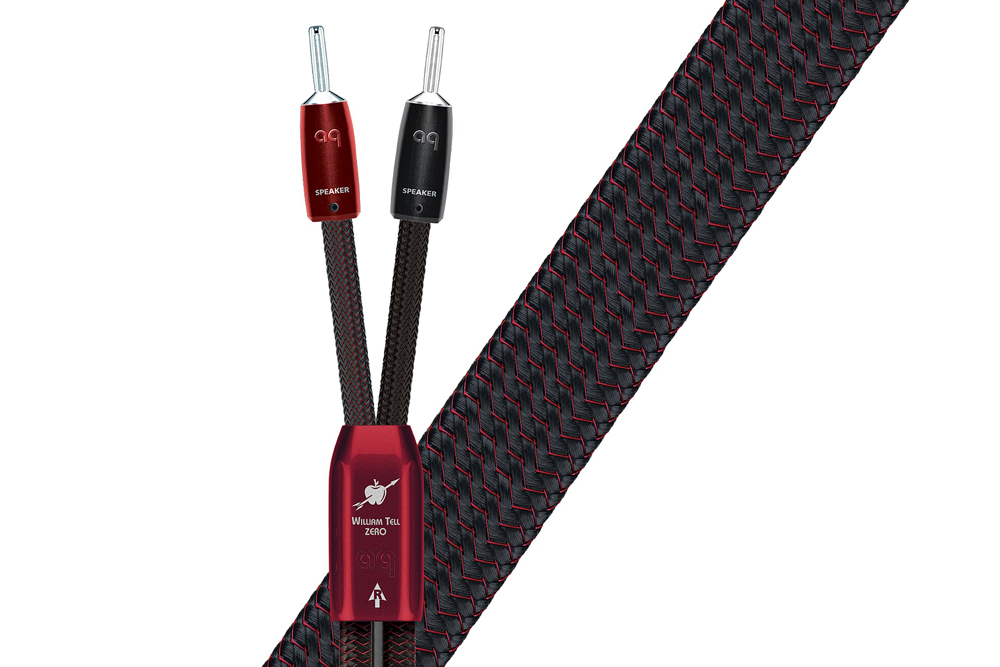 AudioQuest’s cable products’ ascendancy across all segments has made the company an industry powerhouse possessing an immense slice of today’s cable market. AudioQuest’s journey saw it also embark on a content creation collaboration under the AudioQuest Music label offering titles by high profile artists, mainly covering American Blues and roots music. Many of these recordings are the high-rotation lifeblood of music lovers and audiophiles around the world.

The continued research into signal propagation and the electrical and mechanical elements around cable design led, in 2006, to AudioQuest releasing a line of high-end cables using patented proprietary Dielectric-Bias System (DBS) technology. Currently, AudioQuest applies DBS across its upper-middle to high-end cable models. DBS sees its application in our review subject, the William Tell ZERO from the upper-tier ‘Folk Hero’ series (just below the flagship ‘Mythical Creatures’ series). You’ll note the incorporation of the DBS 72V battery system by the small ancillary pack housing strapped to the cable at its connecting end-point (in this case, close to the cable tails at the speaker binding post end). Internally, the battery’s positive terminal is connected to a dedicated non-signal-carrying conductor while the negative terminal is coupled to the cable’s shield. The topology is not in the signal chain in any way.

AudioQuest explains that a cable’s dielectric reaches a “formed”, or charged, stage when in normal use but subsequently loses that charge when not transmitting signal. The 72V DBS pack maintains the dielectric under constant charge (the battery will last for many years without needing replacement). In fact, the claim is that only a relatively high-voltage biasing system like DBS is capable of properly charging a cable’s dielectric (AudioQuest suggests it takes two weeks for the dielectric to form). By that criteria, unless externally charged, your cable’s dielectric has never been properly formed. And perhaps never will be. 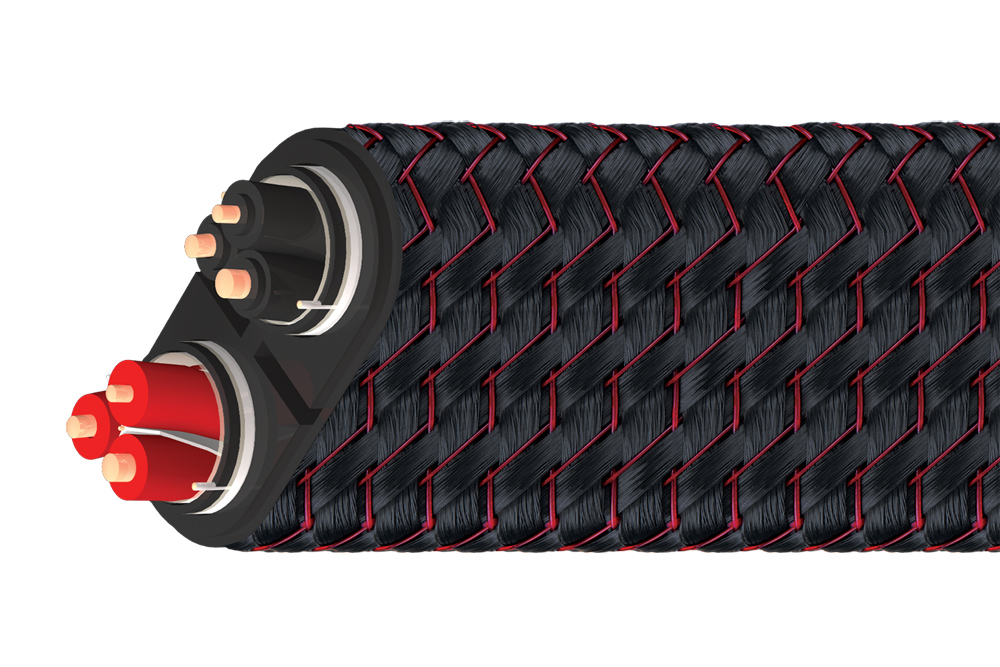 It’s said an ideal cable would transmit the signal at the speed of light. Since that is not within the realms of possibility, a ‘Propagation Delay’ specification has been devised to empirically illustrate the delay as a percentage of the speed of light (one of AudioQuest’s main competitors uses the specification to illustrate its cables’ high transmission accuracy). While propagation delay has no effect on signal, the specification is said to serve as an illustration of the minor losses occurring via the dielectric/insulation and other elements. So you could illustrate the signal’s impediments by invoking Newton’s first law – “an object in motion stays in motion with the same speed and in the same direction unless acted upon by an unbalanced force.” The so-called unbalanced force would be all the electrical (capacitance, impedance, resistance) and dielectric forces acting upon the signal.

In the context of cable design, do propagation delay and “non-linear phase errors” have an effect on the perception of sound at the listening chair? Proper A/B testing would have to be conducted under controlled conditions with a DBS-charged and non-DBS-charged version of William Tell ZERO, for example. Should that be conducted, differences may indeed be subjectively perceived. Meaningful sonic variances may also be detected between William Tell ZERO and your current cable preference… or not. Whether because of DBS or the combination of elements in the William Tell ZERO’s formulation. You are encouraged to open both your mind and ears… just as I have.

As novel as the DBS design is, William Tell ZERO also features a number of key AudioQuest technologies. For starters, WT ZERO (for short) employs AudioQuest’s PSC+ “extreme-purity” solid copper conductors while ‘F/ND-Tech’, yet another patented element, deals with noise by using a wide-band RF-quashing “common-mode phase-cancelling array” topology. Further noise reduction measures are employed via a ‘Linearized Noise-Dissipation System’ (NDS) which uses multiple shielding and a carbon-based resistive network operating across an extremely wide bandwidth. Finally, the relationship and interactions between the conductors themselves and the dielectric is examined too, in order to reduce extreme impedance alterations. 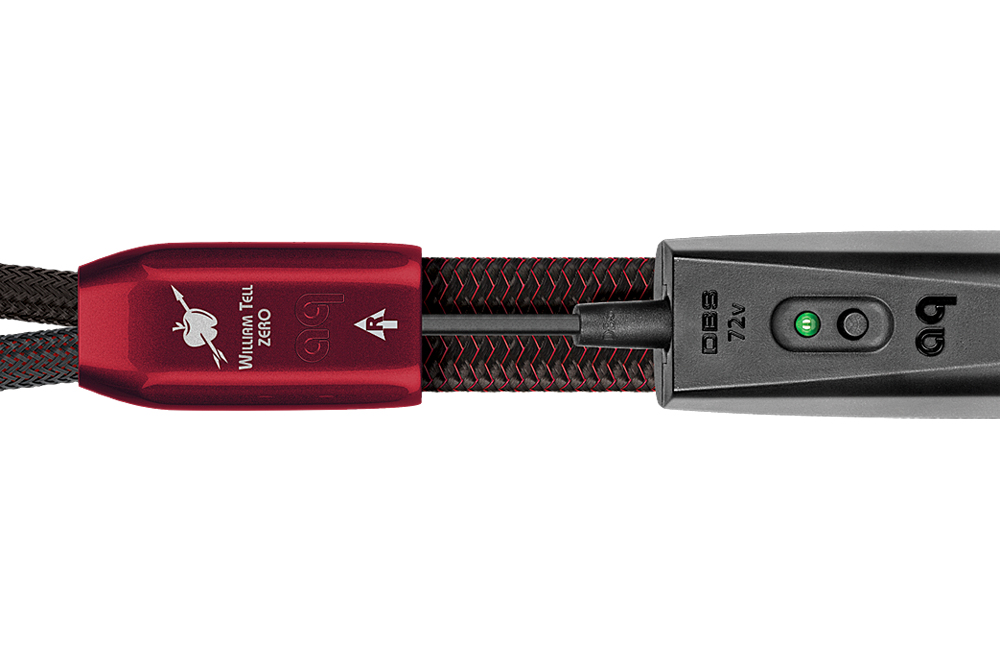 Build quality is excellent. The rounded-edged rectangular structure is hefty enough to hint at an assembly filled with chunky conductors and multiple shields. The dress terminations (they feature printed model name, company logo and directionality) are immaculately-finished and the banana plugs are high quality, ‘cold-welded’, silver plated copper and provide very good surface area contact and grip (spade connectors are also available, as are bi-wire configurations).

It is evident that AudioQuest takes cable design seriously. The accumulation of the patented and unique technologies make for a cable system which promises to deliver as accurate a signal as is possible. As stated above, there are a number of design elements which act as variables to the sound you hear at the signal’s end. AudioQuest has examined all and has devised solutions which the company sees as important aspects of cable performance – most visually evident here in terms of DBS’s formation of the dielectric via the 72V battery pack. Some other companies don’t place the same importance to that aspect and, in turn, may dedicate design efforts towards dedicated grounding schemes, or exotic conductor and connector materials, or super-shielding, or a combination of these. But as they say, at the end of the day, the proof is in the pudding…

Trivial references to a Swiss hero aside, the level of clarity the WT ZERO was like the truth of a shot impacting the mark. AudioQuest has incorporated its ensemble of technologies in order to overcome, as is possible within the realms of physics, the stumbling blocks, the hindrances of signal transmission. William Tell ZERO takes aim as an unwavering pointer, a direct guide for the signal from amplifier to loudspeaker.

Clarity and detail. They were the first takeaways upon initial listening. Low-end tightness was a third outstanding quality which pushed the WT ZERO to my top ten cable chart which includes a variety of price points (from upper-mid-to-the-higher echelons). All that resolution and high levels of detail result in a slightly forward presentation which enriches many styles of music. In this writer’s book, a subtly forward presentation equates to excitement, vocal presence and, usually, good dynamic expression. Conversely, a laid-back perspective tends to distance the performers, it can soften rhythmic traits and, while perhaps being an easier more casual listen, there’s usually a restraint which can be a disconnecting aspect to the ultimate involvement in the performance.

Take the upbeat modern Jazz of the Neil Cowley Quartet’s “Couch Slouch” from the Touch and Flee album. With the WT ZERO in-situ, I appreciated the toe-tapping flow of drum and bass, with the snare in particular jumping out from the mix with excellent dynamic contrast. The well-recorded bass had terrific tightness, therefore maintaining the pitch which was in-tune when playing in unison with Cowley’s piano. 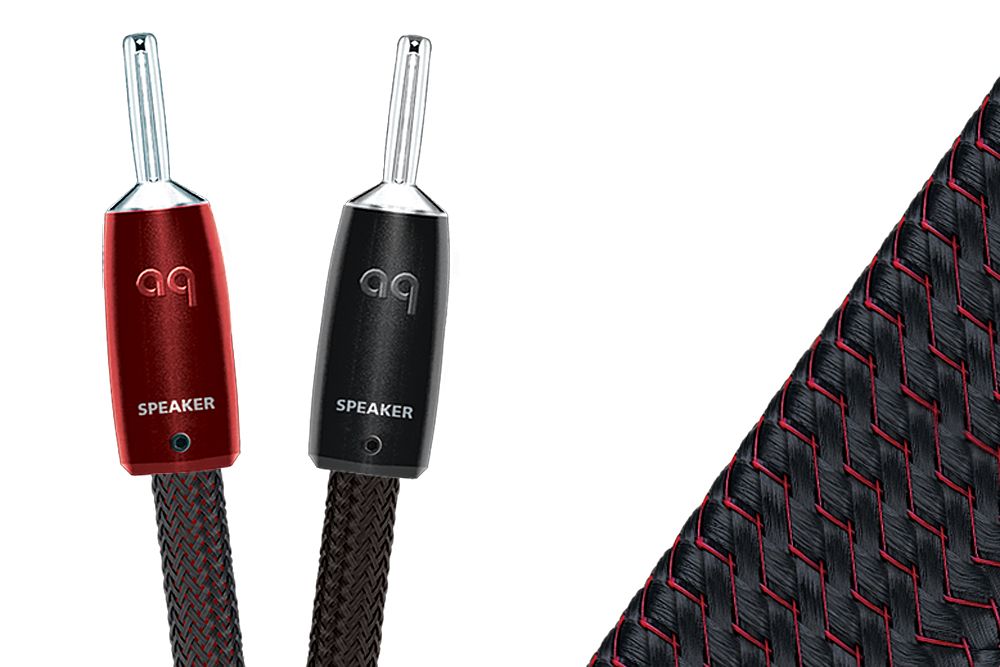 Vocals are projected a tad forward and with credible presence both in terms of separation from the instrumentation stream and in terms of spatial positioning. Images are solidly and tightly focused within a wide, tall and moderately deep soundstage. “Day In, Day Out” from Billie Holiday’s Songs for Distingué Lovers on Verve Record’s superb 1958 release had the songstress placed as though in the room (such a remarkable recording… and it was produced over 60 years ago!). She’s backed by a superb band, and the WT ZERO had the powers of resolution to provide a satisfying impression of a harmonious performance, maintaining the flow, rhythm and intent of the backing band. Oh, and the kick drum accents were stunning – both in terms of impact and enjoyment.

Large orchestral works demonstrated great resolving powers and large soundfields. Again, in my room’s context the soundstage was not quite as deep as other cables we’ve tried but WT ZERO was certainly more vivid and life-like than most. This provided superb levels of nuance and micro-detail to violins and a class-leading separation of musical complexities.

I’ve been collecting my uncle Sergiu Comissiona’s recordings on CD/Tidal/Qobuz in order to get a better understanding of his oeuvre. I streamed his baton-handling of Dvorak’s Symphony № 8 in G, Opus 88 with the Houston Symphony Orchestra and revelled in the excellent rendition of the orchestra in full flight. There was clear delineation of all the sections yet, when the music required the entire orchestra to play in unison, there was cohesion both musically and sonically. Dynamic expression was impressive.

There are literally hundreds and hundreds of cable companies in the audio space. Many simply source the conductors from one of only a few suppliers around the world and dress them in a pretty jacket and hit the marketing button hard. Many also introduce some proprietary aspects or bespoke winding topologies, etc. in order to differentiate themselves from the mob and rise above the… ahem, noise floor. The top companies do all of the above while also introducing patented developments, refined technologies and even solving issues which, some would argue, may not be there (mostly, they are). 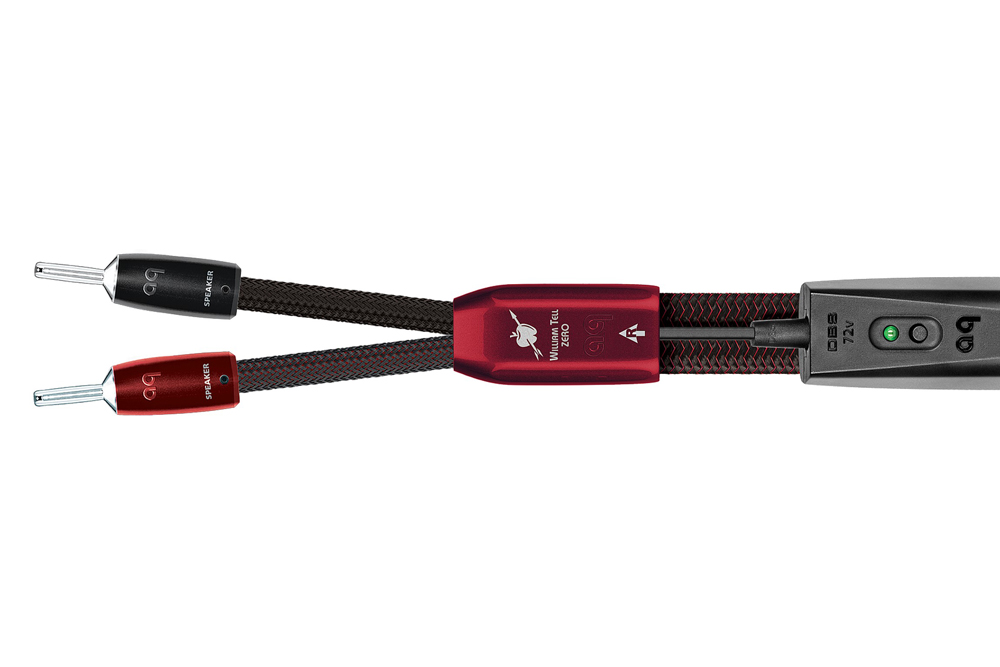 Even fewer manufacture their own connectors, introduce proprietary technologies and offer a complete level of interface solutions across all price points with a product depth which is just about unmatched. AudioQuest is one such company. In addition, at each level, there are pointers to highly developed and thoroughly crafted cable products offering high performance, good value and skilled construction promising long-lasting enjoyment.

To recap, the William Tell ZERO loudspeaker cables encapsulate solid engineering, excellent build quality and, in DBS, a proprietary technology with the promise of improved performance. Indeed, in the context of my system, the cables delivered revelatory detail which provided deep insights into the music. And that is just about as much as you can ever entrust a cable to reveal…